Fresh Off The CCCJ Press!

The Canadian is the quarterly magazine produced by the Canadian Chamber of Commerce in Japan. Their fall issue featured an article of mine on Canada's growing Aboriginal business sector - and its recent move towards bona-fide 'nation-to-nation' trade with China, Japan and other East Asian countries. 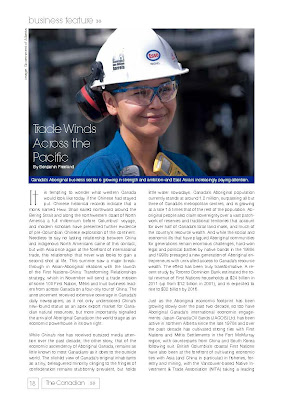 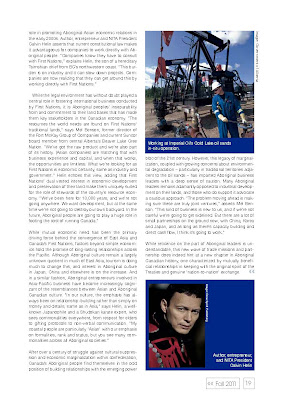 Trade Winds Across the Pacific
Canada’s Aboriginal business sector is growing in strength and ambition – and East Asia is increasingly paying attention.
It is tempting to wonder what western Canada would look like today if the Chinese had stayed put. Chinese historical records indicate that a monk named Hwui Shan sailed northward around the Bering Strait and along the northwestern coast of North America a full millennium before Columbus’ voyage, and modern scholars have presented further evidence of pre-Columbian Chinese exploration of the continent. Needless to say no lasting relationship between China and indigenous North Americans came of this contact, but with Asia once again at the forefront of international trade, this relationship that never was looks to gain a second shot at life.