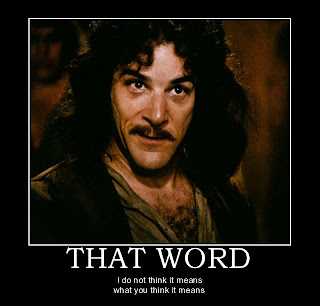 Those of you familiar with this blog know that this is not a 'political' blog. There are many other bloggers who do politics far better than I do and I would just as soon leave this domain to the professionals. However, as words and wordcraft concern me greatly, I felt the need to air my longstanding bone to pick with the constant misuse of the word 'radical' both within and outside the political realm.

What exactly does radical mean? Like many English words, this one comes to us most directly from French, which in turn comes from the Latin word radicalis, which means 'of or pertaining to the root' (or radix in Latin).

In other words, the common usage of the word 'radical' to refer to people on the fringe of whatever movement is being denounced is in fact the exact opposite of the true meaning of the word. A 'radical' in the true sense of the word is a person who adheres to the true roots of a movement or philosophy. A radical conservative would be a true-blue adherent to the principles espoused by Edmund Burke and Joseph de Maistre as opposed to the empire-hungry expansionist Neoconservatism of George W. Bush and others like him. A radical socialist in the true sense of the term would in fact be a more conservative individual than his or her fringier colleagues.

The radical feminism espoused by authors such as Andrea Dworkin, Catharine MacKinnon, Phyllis Chesler and others scared a lot of people, especially men, as its position was interpreted as a literal declaration of war on the male gender. At the core of this mischaracterization was a misunderstanding of the word 'radical' as being a synonym for 'extremist', which saw the movement linked to militant wing-nuts like Valerie 'I Shot Andy Warhol' Solanas. But what exactly is radical feminism? In sum, it's the fundamental belief in the existence of overarching patriarchial social structures that relegate women to second-class status, with men as the default human being. Not exactly an 'extreme' position.

Former prime minister Pierre Trudeau liked to refer to his Liberal Party's political position as the 'radical middle'. This may have struck many as an oxymoron, but in fact he was one of the few politicians to actually use the term correctly. While one might disagree with Trudeau's characterization of his political proclivities (and indeed many declared him a 'radical' in the common, incorrect sense), a true adherence to the centrist orientation espoused by Canada's Liberal Party is, in fact, a 'radical' position.

All this begs the question of whether Oliver was inadvertently accurate in his characterization of the anti-oil sands movement as 'radical'. In all probability the answer is yes. The majority of anti-oil sands activitists, including the likes of David Suzuki and David Schindler, are adherents to the fundamentals of the environmentalist movement and are a miles apart from the Earth Liberation Foundation other eco-terrorist organizations who advocate the use of sabotage and violence in their advancement of ecological causes.

Regrettably, in invoking the dread word 'radical', the minister was clearly trying to cast the aforementioned activists in the same light as their more extremist counterparts. Perhaps it's time for non-extremist but committed people, regardless of their cause, to reclaim the word 'radical' and return it to its 'root'. In other words, we could all be radical radicals.

Note: I would like to dedicate this post to my dear sister, Valerie Freeland, who coined the term 'Inigo Montoya Principle' in reference to words so chronically misused that their 'incorrect' meaning becomes vernacular. Valerie is a PhD candidate in Political Science at Northwestern University, where she studies the politics of truth commissions, international tribunals and International Criminal Court referrals in places like Sierra Leone and Uganda and is a, dare I say, 'radical' proponent of proper word usage.
Posted by Ben Freeland at 09:51