The Cleveland Indians baseball team has never had an easy go of it. Until the mid-1990s, the team was the perpetual laughing stock of Major League Baseball, fielding one awful squad after another. And while Cleveland fans have had more to cheer about in recent decades, with seven Central Division titles and two American League penants since 1995, the team has nonetheless been the focal point of growing controversy surrouding its racially loaded name and politically incorrect mascot, Chief Wahoo.

Admittedly, not all that controversy has been the team's own fault. On Wednesday of this week, after Chicago White Sox ace pitcher Jake Peavey held the Indians scoreless for seven innings,  an unnamed CBS Sports reporter responded with the asinine headline 'Peavey scalps Tribe for fourth win'. This came not long after the team's home opener at Cleveland's ironically named Progressive Field, where fans were greeted by a group of protesters with signs that read 'Stop Teaching Your Children Racism'. For many, the CBS fiasco further emphasized the need for Cleveland's ballclub to change its name.

And yet, baseball purists (of which there are many) continue to defend the name. Defenders of the name evoke the late Cleveland outfielder Louis Sockalexis, a turn-of-the-century star of Penobscot (Wabanaki) ancestry and the first Native American to play in the major leagues, in whose honour the Cleveland team (then called the Spiders) was renamed. While I'm all for commemorating pioneers like Sockalexis, there are lots of ways of doing that other than giving your team a racist name. When Jackie Robinson broke the colour barrier in baseball with the Brooklyn Dodgers in 1947, the team didn't rechristen itself the Brooklyn Negroes. I fail to see the difference.

Of course it would be unfair to single out Cleveland for criticism - other cities have team names that are just as bad. Over in the National League, the Atlanta Braves have long been criticized for their racially questionable name as well as their trademark tomahawk logo and their fans' obnoxious 'tomahawk chop' chant (featuring vaguely Hitlerian hand gestures). Nor is this phenonemon exclusive to baseball. The National Football League has the Washington Redskins and the Kansas City Chiefs, although in defence of the Chiefs, they at least have a wolf as their mascot rather than a racial caricature. 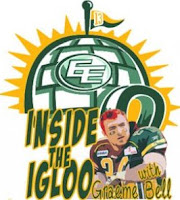 The name I find most baffling, however, is Edmonton's beloved CFL franchise, the Eskimos. Not only is the word 'Eskimo' nowadays considered offensive to Inuit people in both Canada and Greenland (although it remains an acceptable term in Alaska), the name is doubly stupid considering that Edmonton is nowhere even close to Inuit territory and the only Inuit you're likely to meet in the city are migrants from the far north on their way to oilpatch jobs in Fort McMurray. From a geographical standpoint, it would make just as much sense to call the team the Edmonton Mohawks or the Edmonton Newfies. There are certainly more Newfs in town than there are 'Eskimos' - and probably more Mohawks as well. Why Eskimos? Because we're northern? The 'Edmonton Cree' would at least be an accurate name, albeit a bizarre one.

What's more remarkable is that in stark contrast to the Cleveland and Atlanta teams, there seems to be no real controversy surrounding the Eskimos name. In an Edmonton Sun readers' poll conducted in October 2011, which asked readers if they felt the name 'Edmonton Eskimos' was racist, only six percent replied in the affirmative, with 37 percent replying 'no' and 57 replied 'that's just silly'. Granted, readers weren't given the choice of 'no but it's still a stupid name' but the results do suggest that the team's name is a non-issue for sports-loving Edmontonians, or at least those who read the Sun. One can only wonder what the results would have been had they conducted the same survey in Iqaluit or Nuuk.

All this begs two questions. Firstly, why is it that racist sports team names like the Indians and the Eskimos are so stubbornly persistent? And secondly, why is it always Aboriginal people who are being objectified for sporting purposes at a time when stereotypes of other ethnic and racial groups (with the possible exception of the Notre Dame 'Fighting Irish') are totally unacceptable?

The first question is easy enough to answer. Sports culture is fundamentally conservative, a world deeply rooted in tradition and wistful nostalgia. Even the most dedicated progressives turn into to staunch traditionalists when it comes to their favourite teams - borne out of yearning for a mythologized childhoods. Witness the nostalgia in Canada for the 'Original Six' NHL hockey teams and the glory days of the insert-the-blank team in Decade X. And I'm certainly not immune to it. As a longtime baseball fan, I was delighted when the Toronto Blue Jays brought back their early 1990s World Series champion-era jerseys. The sports world lives and breathes nostalgia, making change painful.

But the conservatism of sports culture has its well-known dark side. The passion that sports teams generate has always brought out the ugliest attributes in human beings, be it British-style football hooliganism or Vancouver/Montreal-style hockey riots. And all too often this ugly streak has manifested itself in either overt or veiled racism (as well as, of course, sexism and homophobia). The hatred that baseball star Hank Aaron faced as he approached Babe Ruth's all-time home run record was only a generation ago, and in European football African players continue to have bananas thrown at them from the stands while their Jewish counterparts continue to face hissing fans imititating the sound of gas chambers.

While it would be unfair to equate Chief Wahoo and the tomahawk chop to these overt acts of racism, both stem in large part from the sporting world's profound aversion to change, be that name changes or racial and ethnic integration. And the unfortunate thing about tradition is that it tends to be, well, behind the times. And behind the times is an uncomfortable place to be when you're a member of a long-marginalized minority group.

As for the second question, the reason for the enduring presence of native caricatures like Chief Wahoo is, sadly, garden variety ignorance borne out of 500 years of cultural genocide. An Aboriginal colleague of mine once lamented to me that his son once came back from a museum field trip and exclaimed, "Dad, we saw stuffed Indians at the museum!" Sadly, this is still the enduring image of the noble 'red man' - noble, yes, but obsolete, irrelevant to the modern world and with an annoying habit of showing up uninvited to demand a say in how their traditional territories are used. At least the Tonto cliché conveniently stays in the past.

Fortunately, things are changing, albeit at a snail's pace. Education on Aboriginal history and culture - long woefully inadequate in this country - is gaining ground, and Edmonton Public Schools deserves praise for promoting Cree as a language study option for Aboriginal and non-Aboriginal students alike. Still, anyone looking for evidence of the ugly racist side of mainstream Canadian society need only look at the reader comments on the latest First Nations-related news story on any Canadian news site. Racism towards Aboriginal people still abounds in this country, and when you've finished reading a news story about murdered Aboriginal women and half the reader comments have been 'removed', you know you've got problems.

Aboriginal people represent just under four percent of the Canadian population (although this number is rising) and remain to a great extent a physically (at least those who live on reserve), socially and economically marginalized minority. In the US that percentage is even lower, with roughly 1.37 percent classifying themselves as 'Native American'. As for the Edmonton 'Eskimos', the average Edmontonian has probably never actually interacted with a person of Inuit background and is probably more familiar with Chinese or Japanese culture than with Inuit culture. Which is hardly surprising given the fact that it costs less to fly to Hong Kong or Tokyo from Edmonton than it does to fly to Iqaluit.

Still, tradition or no tradition, I refuse to give the Eskies a free pass. In terms of stupidity, the name is up there with the Toronto Maple 'Leafs' (it's Leaves, people!) and while the pejorativeness of the term 'Eskimo' depends on where you are in the high arctic, the concensus among Canadian Inuit and their Greenlandic cousins is that the term is offensive, as it hearkens back to a time of overt racism in much the same way as the n-word does in the United States. The Eskimos may not have a problematic mascot like the Cleveland Indians do, but the name is still a problem. And at least in Cleveland there's genuine debate going on about it. I've seen no evidence of that here.

I realize full well that I'm stepping onto sensitive ground here. People love their sports franchises and are loathe to see long-hallowed names changed. I get it. But couldn't we find a name for our football team that actually reflects the region, something appropriate, edifying and inclusive? The Oilers and Oil Kings work, as did our old minor league baseball team the Edmonton Trappers, given Edmonton's historic role as a fur trading hub (although the PETA people will no doubt tear a trip off of me for saying so - pun intended). Surely we can do better than a word that falls into the same category as 'Negro' or 'Chink'.

Or perhaps we should follow Notre Dame University's example and call the team the Brawlin' Ukrainians. That would at least be entertaining - and appropriate.
Posted by Ben Freeland at 09:36