I have a confession to make - one that will, I fear, to great harm to my geek cred. I actually know next to nothing about Dungeons & Dragons. I know that it's a fantasy role-playing wargame that has had an enormous impact on the development of today's online RPGs. I know that it's been derided by many as a domain for losers and misfits and inspired the occasional fit of moral panic among social conservatives for its supposed links to Satanism and the occult. But beyond that I know very little about it. I'm open to being educated.

That said, I've recently become fascinated with D&D Alignment Charts, thanks to their current popularity as an Internet meme. From what I understand, in basic D&D, players create characters based on one of three alignments: lawful (implying honor and respect for society's rules), chaotic (implying the exact opposite) and neutral (something in between). Advanced D&D then introduces a second axis of good, neutral and evil, offering a combination of nine alignments. The D&D Alignment Chart therefore looks like this:

In the Dungeons & Dragons worldview, all individuals are to be found somewhere within these nine classifications. Here is a basic rundown of the archetypes in question:


In recent times the D&D Alignment Chart has become a popular meme among sci-fi fans for classifying characters. Here is an example of one from a movie series we all know well. 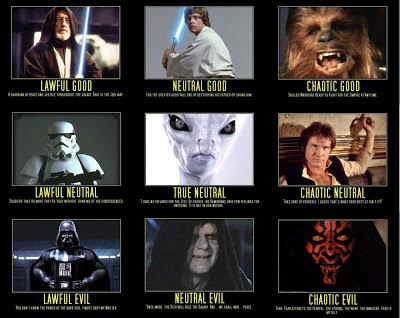 A fun little exercise in character study, and one that got me wondering what its applicability might be in the 'real world'. Specifically, it struck me that this system might be directly applicable to political decision-making. How might we vote if instead of classifying candidates on a crude left-right spectrum we classified them in the two-dimensional D&D fashion? As an experiment I applied the same classification system to Canadian political history. This is what I came up with: 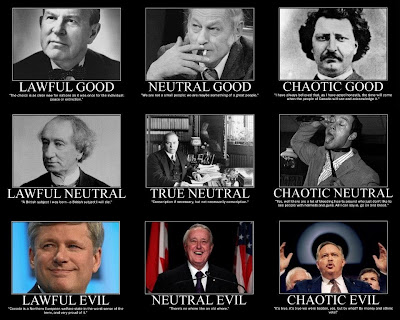 ﻿How are we to read this chart? Clearly the lawful-chaotic axis is more or less analogous to the conservative-liberal axis that dominates our political system, but what of the vertical good-evil axis? While it might seem obvious that one always wants to vote for the 'good' candidate, the track records of these nine individuals bears a closer examination. Of the three 'good' characters, the only one who can truly be described as successful is Lester B. Pearson, and even he had a rough time in his short stint as prime minister. René Lévesque and Louis Riel may well have been good, honourable men, but both were dealt losing hands by history.

When it comes to political longevity, it's clear that neutral is the way to go. Macdonald, King and Trudeau all enjoyed long careers at the epicentre of Canadian political life, with 'True Neutral' W.L. McKenzie King dwarfing all others in longevity, with 22 years as prime minister over the course of three terms. As for the 'evil' category, it remains to be seen how our current Machiavellian prime minister will fare, but the other two enjoyed brief halcyon periods before going out in a destructive blaze of glory. Mulroney famously laid siege to his own political party upon his exit from public life, while Parizeau nearly took out the entire country - and destroyed any credibility his ever had beyond his fellow hard-core sovereigntists by blaming his narrow loss on "money and the ethnic vote."


﻿﻿Who do you want in power? Do you want a Dudley Do-Right along the lines of Pearson or Jimmy Carter or cautious calculators like McKenzie King, a man whose perpetual fence-sitting (e.g. "Conscription if necessary but not necessarily conscription.") while in office was instrumental in navigating a divided nation through human history's most desctructive war? Is it ever beneficial to vote for 'evil'? Few did more to ruin the credibility of the Quebec sovereigntist movement than Jacques Parizeau, which in retrospect might have made him an attractive choice for Quebec federalist voters.

﻿﻿Could the D&D alignment system serve as a more nuanced alternative for discussing political candidates than the rather limiting left-wing/right-wing axis? And speaking of which, how might we have classified the two candidates in this week's US election? Does Mitt Romney's track record for flip-flopping and questionable alliances make him 'Neutral Evil'? Is President Obama more of a 'Lawful Neutral' or a 'True Neutral'? Over to you.
Posted by Ben Freeland at 13:39