How To Drive Like An Edmontonian In 10 Death-Defying Steps 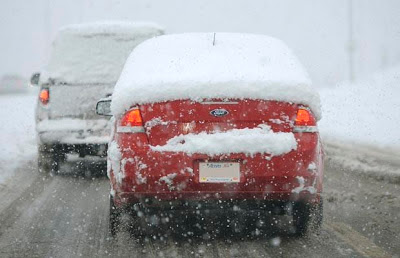 I've been living in Edmonton for just over four year now, and in that time I've observed a very interesting affliction among the residents of my adopted hometown. Edmonton's gorgeous and disturbingly sunny summers (Edmonton receives on average 2,300 hours of sunshine per year) seem to have the effect of making Edmontonians forget the fact that their city spends at least half the year as a frozen, inhospitable wasteland where no sane person would ever want to live. And nowhere is this more apparent than on Edmonton's roads, where even a short drive anywhere makes it apparent that the city's residents have a goldfish-like memory span for how to drive in winter conditions.
While 'Ednesia' is in part to blame for this, Edmontonians are quirky drivers all year round. In summer they're so enamoured by how sunny and green and beautiful everything is that they fail to realize they're travelling at 140 km/h down a major city street. In spring (or what little of this there is in Edmonton) drivers are so relieved that winter is coming to an end and they no longer have to worry about ice on the road that they throw caution to the wind - with predictable results. And come autumn, Ednesia has fully taken hold by the time the first ice appears on the road, usually in mid-October, whereupon Edmonton drivers slide around the road like panicked juvenile deer on frozen ponds. It's little wonder Edmontonian pay among the highest auto insurance premiums in the country!
However, with a little practice and a lot of intestinal fortitude, anybody can learn to drive in this wonderful city. Here are 10 basic Edmonton rules of the road. Follow these rules won't necessarily make you feel safer, but they'll certainly get you feeling like a local in no time.
1) Always drive as close to the person in front of you as possible.
In most parts of the world, this type of driving behaviour is referred to as ‘tailgating’ and will typically earn you the unbridled contempt of the driver in front of you. In Edmonton, however, this is a show of affection, a display of esprit de corps among the city's motorists. This is particularly true in winter, when Edmonton drivers will literally huddle together on the roads to keep warm.

In many places, it is regarded as pointless and dangerous to try to pass your fellow drivers on crowded city streets at the height of rush hour. But in Edmonton there's never any excuse for not passing, even in seemingly inappropriate places like the Tim Horton’s drive-thru, car washes, the K-Days Parade etc. There is always a way to get where you’re going a nanosecond quicker, and the seasoned Edmonton driver will always find a way of doing so.

3) Always wait until the last possible moment before changing lanes.

In Edmonton, changing lanes well ahead of the place where you have to turn is considered cowardice – here you are expected to wait until your turn-off is entirely within your frame of vision before attempting to change lanes. The more advanced Edmonton driver will deliberately take the furthest lane from the turn-off so as to have the opportunity to demonstrate the art of swerving across multiple lanes (see Rule #6) in a grand display of automotive ballet.

4) Turning lanes and passing lanes are one and the same.


In most places, the left turn lane at an intersection is strictly to be used for, well, turning. In Edmonton, however, turning lanes are also intended to be used as an auxiliary passing lane by drivers in a hurry, allowing them to pull out in front of the stopped traffic the very split second the light turns green (or, as is more often the case, a split second before the light turns green). The seasoned Edmonton driver can perform this move a split second after the LRT pulls out of a level crossing ahead but a split second before the light changes. And if you can pull this one off at the highly congested intersection of 78 Ave and 114 Street near McKernan-Belgravia LRT Station, you get extra Ed-Cred.
5) When pulling out of a side street onto a major road, always pull the nose of the car a full half-lane into the street before attempting to turn.

A true Edmonton trademark popularly known as the ‘Prairie Dog Maneuver’, this is the move where you pull partway out of a minor residential street into oncoming traffic so that the nose of your car resembles some sort of inquisitive rodent peeping out of its hole. This is done in order to keep oncoming drivers on their toes, requiring them to swerve gracefully around the protruding car, often directly into oncoming traffic. Sometimes people do this just for fun, without any intention of turning onto the busy thoroughfare in question.

6) When merging onto a highway, always swing across to the lane furthest from you.

An Alberta classic preferably performed behind the wheel of a pickup truck the size of a medium-sized bungalow, a perfectly executed ‘Wild Rose Glissade’ will win you immediate respect among Alberta drivers. Edmontonians and Calgarians frequently compete against each other on the QEII as to who can perform this maneuver most skillfully and artistically in heavy traffic, with extra points given when executed in treacherous winter conditions. A rural variation on this move, known as the ‘Stavely Swerve’, involves swerving across the highway to the opposite side of the street across oncoming traffic, and then taking an impromptu roadside pit stop so as to have a conversation with your friend who is bailing hay in an adjacent field.

7) Never, ever let anyone merge in front of you.

Merging on Alberta roads is the art form that it is in large part because Alberta drivers, as a matter of pride, will do everything in their means to prevent you from merging in front of them. Techniques for doing so include driving so close to the vehicle in front of them as to resemble a car in tow (see Rule #1), turning the hazard lights on so as to feign mechanical problems and driving directly alongside the vehicle attempting to merge, matching their speed imitating their every move in the sincerest form of driver flattery.

8) Large pickup trucks are entitled to as many parking spots as they ‘need’.

Newcomers to Alberta are often perplexed at how the province's innumerable pickup trucks succeed in defying the laws of physics by simultaneously occupying six or more parking stalls. Don't question it. It's their job to occupy space, and causing a fuss will simply make them grow larger until they begin physically absorbing the cars around them through gaps in their component atoms. Trust me; I've lost two cars in this way. Don't push your luck.
9) Never, ever use your car horn.
Spend any time on Edmonton's roads and you'll notice that hardly anybody ever honks their horns, even in situations where it's clearly warranted. Contrary to what you might think, Edmontonians are a shy, self-effacive bunch akin to the Swedes who, while they may drive like maniacs, are loathe to cause trouble while outside of their cars. Being honked at is tantamount to a major loss of face and an unwelcome intrusion into people's automotive bubbles. It's also considered unsportsmanlike in this city of street ninjas who operate with speed and stealth - or at least as much of this as they're capable of conjuring up.
10) There really always is time for Tim Horton’s.


While Edmontonians always appear to be in a hurry, Edmonton drivers will always find the time to pull into the drive-thru at Tim Horton’s for their daily (or more) double-double. Moreover, pulling off the main road into the Tim’s drive-thru lineup, getting through the lineup in the shortest time possible and pulling back out onto the street with their coffee and box of Timbits gives drivers a chance to demonstrate their prowess at most of the rules outlined hereabove, as well as the jolt of sugar and caffeine that fuels all this outlandish behaviour.
Posted by Ben Freeland at 13:27