Remember the 'United Breaks Guitars' YouTube fiasco? For those unfamiliar with this now infamous PR disaster, 'United Breaks Guitars' is a protest song written by Halifax-based alt-country/folk musician Dave Carroll in 2009 following a nine-month battle for compensation with United Airlines over a broken guitar. Finally after nearly a year of being ignored by the airline, he wrote and recorded a song parodying his experience accompanied by a satirical video, which he posted on YouTube. The song immediately went viral, amassing 150,000 views in a single day, and roused the slumbering airline into PR damage control.

For those of you who have yet to see the infamous video, here it is.

In the nearly four years since the release of the 'United Breaks Guitars' video, the incident has become a staple in most public relations textbooks when discussing the hazards of ignoring customer complaints - especially in the era of social media. It also brought the issue of broken luggage - or at least broken musical instruments - to the forefront of public consciousness. In the aftermath of the UBG scandal, United rival Delta immediately seized the opportunity to tout its baggage-handling records in an ad that specifically mentioned Taylor guitars (a direct reference to the Carroll song).

It was therefore ironic when, in January of this year, Delta's baggage handlers came under scrutiny for breaking a vintage guitar belonging to Detroit-based musician Dave Schneider (although in this case it was a Gibson instrument, not a Taylor). The story - and the airline's initial evasiveness - received widespread news and social media coverage, virtually all of which referenced the scandal that put airlines breaking guitars on the map in the first place. In the end Delta offered to pay for the damaged instrument while issuing the following apology:

Mr. Schneider,
I want to further add apologies on behalf of myself and the entire Delta Executive Leadership team for the inconvenience and stress this situation caused. We are reviewing the series of events in full to ensure appropriate steps are taken to prevent future occurrences. Again, my sincerest apologies–please feel free to contact me directly if you would like to discuss further.
Jon Litzenberger
Delta Air Lines

Now it would appear to be Air Canada's turn in the instrument-breaking doghouse. Yesterday afternoon the following Twitter exchange took place: 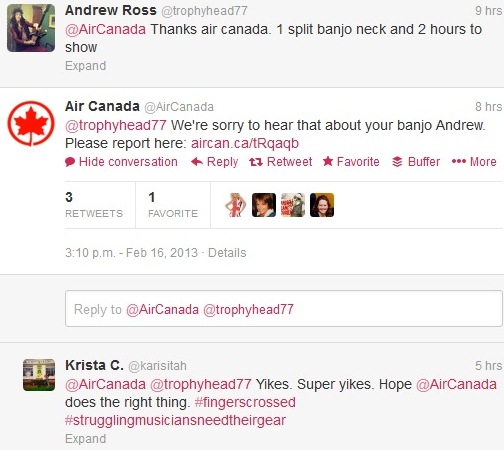 While it remains too early to tell, it would appear for now that this spat will remain in the Twittersphere. Air Canada, it should be said, is among the world's most active airlines on social media and whose respond time to customer complaints and concerns is nothing short of remarkable. In this case, the airline immediately apologized for the accident and directed the passenger to the airline's damaged baggage page. For now a potential PR disaster for Canada's largest airline appears to have been averted thanks to Air Canada's social medial diligence, although you can be sure I'll have my eyes peeled for further references to Air Canada breaking banjos.

As a side note, it should be known that in the aftermath of United Breaks Guitars, US congressional action prompted the Federal Aviation Administration (FAA) to change its rules to make it easier for passengers to transport musical instruments as carry-on luggage. Section 403 of the FAA Modernization and Reform Act of 2012 provides that “An air carrier providing air transportation shall permit a passenger to carry a violin, guitar or other musical instrument in the aircraft cabin, without charging the passenger a fee in addition to any standard fee that carrier may require for comparable carry-on baggage.”

While this legislation applies only to US carriers, Air Canada has stated that it will accommodate "smaller musical instruments such as violins" (and presumably banjos) as carry-on luggage. As for larger instruments like guitars, the airline still requires that they be stowed in the plane's cargo hold while stating unequivocally that the airline is "not liable for damage caused by failure to properly prepare a musical instrument for travel." Nothing is known about how the banjo is question was stowed.

Clearly stated policies combined with a swift social media response appear to have saved Air Canada from yet another musical instrument-related PR nightmare. It seems as though the industry has truly learned its lesson. Now if only these airlines could manage to stop brutalizing musical instruments in their care. Regardless of what the airline may offer as compensation, a broken banjo two hours before a gig is an unenviable position for a musician to be in. Perhaps Skytrax needs to create a new ratings category for 'likelihood to break instruments' for the benefit of nervous musicians.
Posted by Ben Freeland at 23:54