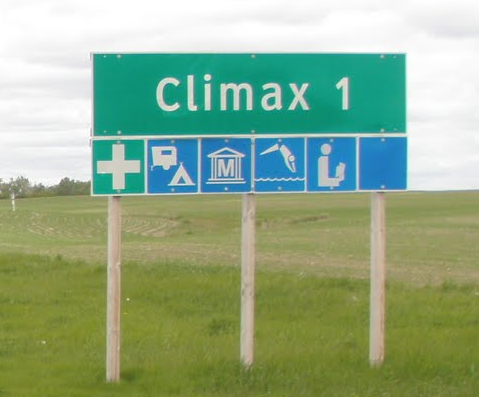 Looking for an off-the-beaten-track theme-based trip across this great country of ours? Why not go from east to west (or west to east, whatever your taste) via the 40 raunchiest place names in the country - a tour that ought to dispel any notion that Canadians, as a people, are undersexed. That said, you're going to be spending a disproportionate amount of our travel in the great province of Newfoundland, with some extensive travel in Québec and Saskatchewan. And not much time in Manitoba or New Brunswick, both of which clearly need to get their act together.

Located southwest of Rimouski on the south bank of the St. Lawrence, Anse à Mouille-Cul, for the Gallically challenged among you, translates to 'Wet Ass Cove'. No idea why, but we're sure the story behind it is highly amusing.

A small town on Cape Breton just outside Sydney, NS. No idea if the town has a slogan, and if so if it's a variant on "Grow A Pair," but I certainly hope so.

Situated west of the Queen Elizabeth II Highway roughly 40 km north of Calgary and 12 km south of Airdrie. Founded as a railway town, it got its name from turn-of-the-century rail baron William Cornelius Van Horne (stop it) in honour of his favourite author, Honoré de Balzac. But you can rest assured that 19th century  French literature is not what the name conjures up among 19-year-old frat boys whipping through town.

Located roughly 90 km west of Saskatoon, the town of Biggar's unofficial slogan is "New York is Big, but this is Biggar." At least this is their publicly stated slogan, as I'm sure there are X-rated variants of this. No word on whether Biggar intends to pursue a sister city partnership with Tiny, Ontario, but it would be a wonderful thing if they did. After all, I'm sure Tiny needs some love.

5) Blow Me Down, Newfoundland

A provincial park in eastern part of the Rock, situated, appropriately enough, on a long, vaguely phallic peninsula that juts into Conception Bay. Like you didn't know that!

A small town on the north bank of the St. Lawrence about 40 km northeast of Trois-Rivières, this town's name translated to 'broken underpants'. Or possibly crotchless panties. Either way, we're on our way!

While technically not an actual municipality, the now-abandoned village of Bummer's Roost, located in the Lount Township of northeastern Ontario, still makes the cut - not only because of its name but due to the story behind it (pun intended). Apparently the name came from a local vagrant who was known as Dick the Bummer (actually), who famously scrawled the words 'Bummer's Roost' on a shingle with a piece of charcoal at what was to become to the site of the town. The name stuck - even after the town was abandoned in 1926. Is anybody even remotely surprised?

A village with a population of 82 in the municipal district of Lone Tree No.18 (about 160 km from Swift Current and not especially close to Regina - you know you were thinking it!), the proud little town of Climax is probably best known for its welcome sign which, according to Trivial Pursuit, says "Please come again" on the opposite side. I've never been there so I can't confirm this, but I really hope this is the case.

Situated on exactly the opposite side of Algonquin Provincial Park from Bummer's Roost. Appropriately enough.

Located approximately 100 km due south of Antigonish, on the northeastern coast of mainland Nova Scotia. A long way from Come by Chance, but clearly in the same spirit.

Located east of Prince Albert, Saskatchewan, and roughly 200 km northeast of Saskatoon. No, we don't know who 'Fairy Glen' was, but can only assume he was a lot of fun - fun enough to name a town after.

A small town in the southeasternmost corner of Saskatchewan, Fertile is, it should be noted, nowhere near Climax. Which makes you doubt the connection between these two things.

Technically not an actual town; just a flag stop along the VIA Rail line through Manitoba. Still, it sounds obscene, so it made the list.

A small town in Pictou County, Nova Scotia, Garden of Eden was founded by a group of ex-pat Scots fleeing the second Jacobite Rebellion in 1845. The town is now a draw for cottagers and tourists. Whether any of that tourism is of a naturist or otherwise scandalous nature is unknown.

Jackhead is a First Nation community situated on west bank of Lake Winnipeg in central Manitoba. Nowhere near Finger. Or Climax.

La Grosse Roche (lit. The Big Rock) isn't so much obscene as extremely unimaginative. It's a big rock-like island in the middle of Lac Kénogami in the Saguenay region of Québec. The phrase "get your rocks off" doesn't translate directly into French, but if it did it would make for a good tourism slogan.

Now this, on the other hand, is a good one! A tiny town on the opposite side of the river from Trois-Rivières, the town's name literally translates to 'The Visitation of the Very Happy Virgin Mary'. We're not sure what this 'visitation' entailed, but you can rest assured it was a happy one. What people from this town call themselves is something I would very much like to know.

The central Albertan town of Legal (pronounced Lay-GAL) makes the list, if only because the outskirts of town are known as "Barely Legal". Or so I hear.

The town of Mission straddles the Fraser Valley - directly between Surrey and Chilliwack. Titter all you like - it's a very pretty place, and pretty meat-and-potatoes in its tastes.

A tiny outport of 100-odd souls on the northern coast of Newfoundland, Nipper's Cove isn't as overtly sexual as some of the Rock's more colourful place names, but it still sounds vaguely naughty. Sort of in the same vein as Pincher Creek, Alberta - a town whose motto really ought to be "Pinch Her What?"

About 280 km due east of Saskatoon, this town's name is just plain funny. Not sexy per se, but definitely worth a giggle or two.

Like Finger, Manitoba, Old Cummer is technically a rail stop (on the GO Train system) rather than a municipality per se. But the fact that this name exists on a map at all merits its inclusion on this list. Whether Old Cummer ever met Dick the Bummer of Bummer's Roost fame is, alas, lost to the annals (sic) of history.

Québec may have Brise-Culotte and Notre Dame des Sept Douleurs, but it's not alone in the sadomasochistic name department. But it still seems to be a French thing, as this small agricultural town in southwestern Ontario (in the municipality of Chatham-Kent) is largely Franco-Ontarian, and the name actually means 'Short Bread'. Still, we like the English pronunciation better.

In Québecois slang (Joual), the word pitoune occupies a place somewhere between 'hot girl' and 'slut' - not quite as derogatory or overtly sexualized as the latter but more overtly sexualized than the former. Doesn't quite translate fluidly. But whatever the case, this small town in Québec's Eastern Townships (near the ill-fated town of Lac Mégantic) gets more than its fair share of Beavis and Butthead-type giggling in La Belle Province.

Not sexual per se, but definitely in keeping with the Rock's predilection with reproduction-themed place names (see Conception Bay). About equidistant from Conception Bay South and Come by Chance.

Like Bummer's Roost, Smuts is a ghost town, and as far as anybody knows was never particularly smutty. (Moose Jaw, the bootlegging capital of sin of old, has that honour in the province of Saskatchewan.) The only structure left standing in Smuts is a church, which suggests a pious place, but perhaps there's a Sodom and Gomorrah story here that we don't know about.

Situated on the Trans-Canada, about 40 km north of Hope, BC. I myself have driven through Spuzzum many times and the name never fails to make me giggle. According to Wikipedia, the name comes from the Stó:lō language and means something like 'little flat'. I personally don't buy it, and suspect the Stó:lō people are having us all on, because this is obviously a rude word. More research is definitely needed.

Located about 40 km north of Cranbrook, Ta Ta Creek is a scenic spot amid the majestic peaks of the Kootenays. Alas, this author was unable to find out what Ta Ta means in the indigenous Ktunaxa language, so I'm going to assuming it's something to do with boobs.

Literally half a continent away from Biggar, Saskatchewan. Poor thing.

A small farming town northeast of Vegreville - a town best known as the home of the world's largest Ukrainian easter egg. With a name that sounds like breasts.

I've seen the signs for this place many times. Turn off the Queen Elizabeth II Highway at Olds and go west, and that's where you get. It's a campground. It's westerly. Whatever else goes on there I cannot say.

Situated, appropriately enough, among the Seven Sisters Peaks in northern BC, on Route 16 between Smithers and Terrace. Pick an Austin Powers quote and it probably applies.

It's the province of New Brunswick's only contribution to this list. And it's situated just outside Sackville. That's about all I can say about the place.

All the places on this list are, shall we say, far from major urban centres. The only 'real' city in Canada that stands a chance of making the cut is the perennial titillator, Regina, which, while not a sex word, rhymes with one. And since the Saskatchewan capital seems to make a lot of Americans giggle, it would be sacrilegious not to mention it.

So there you have it - Newfoundland wins with seven out of 40 on this list, followed by Saskatchewan with six plus the aforementioned honourable mention. Did I miss any? Let me know.
Posted by Ben Freeland at 23:10