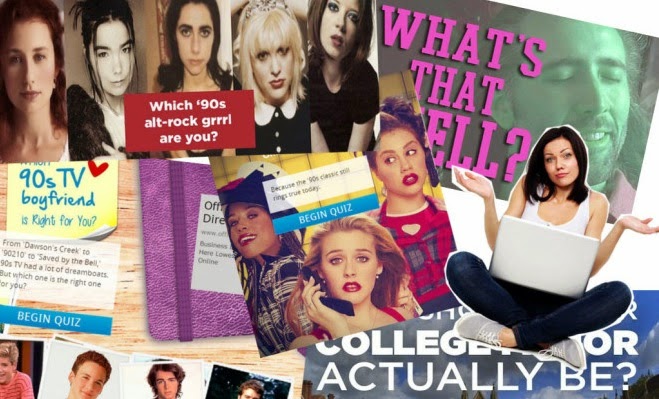 Is anybody else getting tired of these yet? What started out as a mildly amusing time-wasting activity on Facebook has now become a full-on obsession, with personality quizzes generated by Buzzfeed, Zimbio and other procration-enablers becoming stranger and more obscure by the day. Having pretty much torn through every pop culture reference available (from Which SuperMario character are you? to Which Disney prince is your true love?), it's now gone beserk, with quizzes like 'What vegetable are you?' and so on. It's like Kindergarten collided with a Barbara Walters interview!

There is, of course, a dark side to these seemingly harmless diversions. Marketplace tech writer Stacey Vanek Smith contends that quizzes such as these are little more than "free data mining tools for brands" in an era where privacy is becoming steadily eroded. As Smith notes, if you, for example, complete the 'How would you die in a Game of Thrones episode' quiz, HBO now not only knows you watch the show but also what your preferred alcoholic beverage, what your last meal was .and what your most crippling fear is. Depending on your perspective, it's either a brilliant market research strategy or yet another corporate invasion of privacy.

And what do we get in return? Generalized responses that fall within the ambit of the Barnum Effect, much akin to the blurry, ambiguous predictions dished out by so-called psychics that could potentially apply to any living, breathing human being. And when put to the test, they're reliably inaccurate. Back in February Gawker reported that Garbage frontwoman Shirley Manson took the 'Which 90's Alt-Rock Grrrl Are You?' quiz - and didn't get herself, even though she was clearly one of the available answers. I'm sure the James Randi Educational Foundation could have predicted this.

So why are we hooked on these things? Is it because we're all intolerably narcissistic? Far from it, says Wired writer Devon Maloney, who purports that it's a crippling sense of insecurity over our true identities that is fuelling this craze. He also argues that it's nothing new. "For the same reason that IQ tests or the Meyers-Briggs Type Indicator have been popularized well beyond their scientific origins, quizzes that tell us we really should be lawyers (or that if we were a Game of Thrones character we’d be Tyrion Lannister) help us to order our sense of self when faced with the gaping vortex of an unknown future," he explains.

That said, this meme seems to have reached the shark-hurdling point, with quiz titles becoming more and more of a stretch. Makes you wonder which online quizzes have been rejected as too obscure, too tasteless or just too damn weird for the denizens of Zuckerbergistan. Here are ten possibilities.

1) What blender setting are you?

Are you a quiet slow-blend type or a fast-moving, go-go-go purée type? Or a veritable ice-crusher of a personality not to be trifled with. There's potential here.

2) What type of insect sting are you?

Is your personality type more akin to the creeping, prickly pain of fire ants or the blinding agony of a pepsis wasp (aka tarantula hawk) sting? Either way, you probably don't have many friends.

3) What Central African despot are you?

Are you a fan of Napoleonic coronations and beating defenceless school children with wooden bats? Then you're probably Jean-Bédel Bokassa (aka Emperor Bokassa I) of the Central African Republic. That is unless your tastes run more towards leopard-skin hats and shopping trips to Paris on a chartered Concorde, which clearly makes you General Mobutu of the DRC (formerly Zaire). How about cowboy hats and cannibalism? You get the picture.

4) What telltale sign of human-induced climate change are you?

Are you the type who storms into a room like a Category 5 hurricane or one who simply slips away from parties like a collapsing icefloe? Or are you a counterintuitive type who likes to mess with people's minds à la polar vortex? I'm sure I've nailed you somewhere here.

5) What sexually transmitted infection are you?

Are you an outgoing person with whom people get to know quickly and thoroughly? Then you're probably syphillis. Or are you more of the subtle yet persistent personality, akin to crab lice. Whatever the answer, you're most likely not going to want to 'transmit' it to your friends.

6) What white supremacist group should you belong to?

Are you a bluff old traditionalist who likes parades and barbecues? The Ku Klux Klan is still inexplicably around and, I'm sure, eager for new members to shore up its long-dwindling ranks. But if you're a bad-ass entrepreneur who likes the rough-and-tumble life of narcotrafficking and doesn't mind collaborating with Mexicans, then the Aryan Brotherhood is probably more up your alley.

7) What famous historical assassin are you?

Are you a crazy spontaneous type who loves the outdoors? Then you're probably Gavrilo Princip, the plucky young Serbian nationalist who gunned down Archduke Franz Ferdinand of Austro-Hungary in 1914, thereby triggering the outbreak of World War I. Love the outdoors but more reticent and calculating than this? Then you'll probably get Lee Harvey Oswald. More of a culture lover? Then you'd be more of a John Wilkes Booth type.

8) What flu strain are you?

In your social life, do you prefer regular but brief visits with friends or do you prefer to keep yourself at a distance so as to make your appearances more memorable and longlasting? If the latter, you might just be the H1N5 bird flu. If the former, you might be asked if you like sangria and flamenco music, which would clearly gives you an affinity with all things Spanish, including H1N1.

9) Which Edmonton social media personality are you?

Does your gregarious personality and flair for witty repartée require that you be everywhere, all the time? If the answer is yes you're probably Kathleen Smith (aka Kikki Planet), forever stuck in a 1980s movie yeg-topia that veers wildly from cute animals and fashion tips to scorpionic venom unleashed on errant local officials. Or you might be a mild-mannered Mack Male (MasterMaq) type, forever patrolling the landscape looking for news like a saint bernard with a laptop. And if your overwhelming obsession is food and all things culinary arts-related, Linda Hoang (aka @lindork) is more up your alley.

10) What Buzzfeed personality quiz are you?

Sadly, this living definition of the prefix 'meta' has already been done. Sort of. Oh well.
Posted by Ben Freeland at 16:20