Writing About Edmonton (for Emirates Airlines) 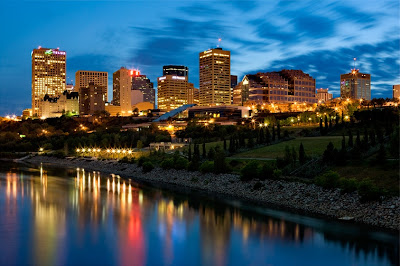 A month ago I was approached by the editor of Open Skies, the in-flight magazine for Dubai's Emirates Airlines, about a destination piece on Edmonton. Remarkably enough, in the three-plus years that I've been living in Edmonton, this was the first time I had ever been asked to do a "destination piece" on the city. Prior to this, the only other serious article I had written about Edmonton was one that I did a couple of years back for WestJet's Up Magazine, a piece on the African culinary scene on 107 Avenue.

Edmontonians often joke about the city's lack of viable tourist attractions. "A nice place to live but I sure wouldn't want to visit" is an oft-heard quip in a city whose best known tourist attraction is a leviathan shopping mall built along North Korean architectural lines that houses half of the Canadian navy's submarine fleet. However, Open Skies wasn't interested in a traditional destination piece. They specifically requested a rich, descriptive article focused on Edmonton's role as Canada's 'oil capital'.

Each month Open Skies features an 'Our Man In.....' article (sorry, the gendered title isn't mine) focused on a different city within their network - or in Edmonton's case their partner airlines'  networks. (Emirates recently signed a codeshare agreement with Westjet.) Past features have covered the likes of the couture culture of Paris, São Paulo's edgy nightlife and the shipbreaking yards of Chittagong, Bangladesh. Set along side that last one, a feature on Oiltown, Alberta makes perfect sense.

Here's what I came up with. And here's the actual article. You can also find it on the Open Skies website.

Our Man In Edmonton

Canada’s oil capital is one of its most paradoxical cities

You can tell a lot about a place from its traffic – and the capital city of Canada’s second westernmost province is no exception. On any given Friday night, Jasper Avenue – Edmonton’s main nightlife artery – is choked with brand-new pickup trucks driven by newly well-to-do blue collar men in their early 20s. Some are there for on a break from the northern oil and gas boomtown of Fort McMurray.

Others work downstream from the oil sands in ‘Refinery Row’ in the eastern suburb of Sherwood Park. All, however, have come to symbolise the ever-growing affluence of Canada’s ‘Oil Capital’ – a laissez-faire city where just about anything goes, provided you don’t criticise the oil sands.
﻿
﻿Alberta’s oil sands (also known erroneously as the ‘Tar Sands’) are a formidable presence in every sense. Physically, the bitumen deposits situated under Alberta’s northern boreal forests are enormous, occupying a land mass roughly the size of Bangladesh and containing the world’s largest proven oil reserves after Saudi Arabia. In economic terms they have turned Canada into a veritable oil and gas superpower and given Alberta a per-capita GDP higher than all 50 US states.

﻿Unsurprisingly, international criticism of the province’s energy industry has become a decidedly sensitive matter. And nowhere is this truer than in Edmonton, a city whose mercurial economic fortunes have paralleled those of Alberta’s oil industry, and whose growing stature has in large part been made possible by the scarred, oil-rich real estate to the north of the city.

Alberta’s capital city is a paradoxical place. Founded in 1795 as a northern fur trading post, Edmonton emerged as a transportation gateway to northern Canada in the early 20th century, first to the diamond mines of the Northwest Territories and later to Alberta’s burgeoning energyindustry. To this day, Edmonton is seen more as a transit point than a destination in and of itself, overshadowed at every turn by its flashier twin, Calgary, the province’s corporate and tourism hub.﻿﻿

And yet the city surprises. Nestled around a leafy bend in the Saskatchewan River, Edmonton is home to 40 different arts and culture festivals, including its world-renowned Fringe and Folk Festivals. Its population is increasingly diverse, with a recent influx of immigrants from Africa and the country’s fastest growing Aboriginal population giving this once overwhelmingly European city an increasingly multicultural flavour.
﻿
﻿﻿Tolerance extends only so far, however. Controversy erupted earlier this year when it transpired that a documentary that criticised the exploitation of the oil sands had been funded in part by the Alberta government, leading the city’s normally mild mannered journalists and citizenry to cry blue murder.

Renowned Canadian humourist and Calgary native Will Ferguson once described his fellow Albertans as “a hospitable bunch as long as you don’t push your luck.” Nowhere does this better apply than to Edmonton – an oddly high-brow yet fundamentally blue collar metropolis where a live-and-let-live spirit prevails, so long as the city’s sacred economic cow is accorded its due respect.
Posted by Ben Freeland at 11:19