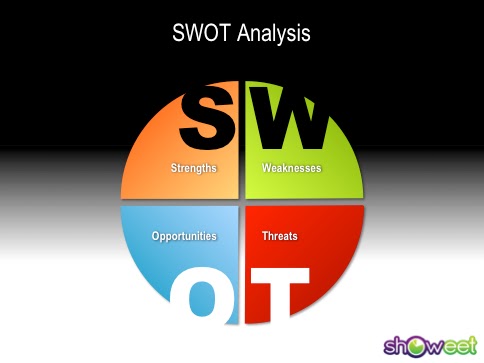 One of the first things they teach you in any public relations program is how to conduct a SWOT analysis. For those of you unfamiliar with this cornerstone of strategic planning, SWOT is a handy acronym that stands for Strengths/Weaknesses/Opportunities/Threats. In a nutshell, it's a very helpful way of identifying the internal and external factors that stand to either help or hinder you in pursuit of specific organizational goals.

For marketers and crisis communicators, the SWOT analysis is the equivalent of the periodic table - an essential tool without on which the rest of the communications planning process depends. It is used in creating recommendations during viability testing and is also an invaluable tool in crisis management planning. It's a disarmingly simple rubric, one that strikes me as being just as applicable to personal predicaments as to organizational issues.

Just how applicable is the SWOT to personal situations? Consider the dilemmas faced by the following fictional characters - and imagine if they had incorporated this analytical approach into their strategic planning processes.

Once Snow White had retreated to the forest and been taken in by the seven dwarves, she had successfully bought herself enough time to draw up an impromptu strategic plan for dealing with her evil stepmother who was in hot pursuit. Her end goals were straightforward enough: evade capture and death at the hands of the wicked queen and marry her Prince Charming. Having established this, her SWOT chart would have looked something like this:

Strengths
Weaknesses
Opportunities
Threats
Had Snow White sat down and gone through this process rather than frolicking around the forest picking buttercups, she might have saved herself a lot of unpleasantness. As it happened, however, she would not have known that her trump card was the ability to survive a fatal fruit-induced poisoning by way of a kiss from her true love. Snow White proved to be the fairlytale equivalent of the Exxon Corporation - capable of surviving even the most botched crisis management 'cause, well, we need that happy ending.

While Snow White is clearly a case of failed strategic planning that could only be salvaged by Deus ex Machina intervention by Disney's happy ending industry, Luke Skywalker presents a more fascinating case. Consider his quandary upon escaping his near fatal battle with Darth Vader on Cloud City, a duel that cost him both his good hand and his blissful ignorance about his family lineage. While beaten up and demoralized, Luke was still alive - and like Snow White had bought himself enough time for some planning.

Luke's SWOT analysis probably would have looked something like this:

Strengths
Weaknesses
Opportunities
Threats
Looking at this breakdown, it seems clear that the SWOT analysis was part of Luke's Jedi training, shoehorned somewhere in between swinging from trees and telekinesis. When he shows up on his home planet of Tattooine ready to take on the Hutt, he's clearly a man with a plan - and he executes it perfectly.

But it's not just the heroes who can benefit from a good strategic plan. Had more fictional villains taken this approach, their villainy might just have triumphed.

Case #3: The Wicked Witch of the West

The Wicked Witch of the West is an unfairly maligned figure. A foul-tempered, misanthropic witch to be sure, she still had far more reasonable aspirations than most fictitious villains, namely to avenge the death of her sister - and reclaim those snazzy red shoes. Once Dorothy sets off on the Yellow Brick Road in the company of her three ridiculous companions, the witch knew it was only a matter of time before the girl and the stolen shoes reached the all-powerful weight-loss guru wizard. But she still had time to do a quick SWOT analysis, which would have looked something like this:

Strengths
Weaknesses
Opportunities
Threats
In a SWOT analysis, the idea is to leverage your strengths so that they counter your weaknesses, and do the same with your threats and opportunities. Unfortunately, in spite of her best laid plans, the Wicked Witch of the West's last and most crippling weakness proved to be insurmountable. Barring some sort of advanced water-shield, no SWOT analysis in the world could have pointed to a solution to this problem. Sometimes the best solution really is to be nice to everyone and not make a fuss when people steal your stuff. Especially if you can be killed with a bucket of water.
Posted by Ben Freeland at 21:00