I confess to being a relative latecomer to the world of Twitter, having joined it less than a year ago. Nevertheless, I am now a full-fledged convert, or Twaddict, as such people are known in the Twitter universe. As a fan of punchy, concise text, I find the 140-character format absolutely brilliant. Not only is it a great way to disseminate and find information, by the microblogging format saves you the trouble of sifting through irrelevant and excessively wordy text on your way to the information you're looking for.

My embrace of the Twittersphere has also more or less coincided with my return to studying Japanese. My search for good, east-to-digest and relevant reading material in Japanese not surprisingly led me to Twitter, and I currently follow a number of Japanese tweeters of various descriptions. Whereas Facebook was slow to gain currency in Japan, Twitter took the country by storm very early on. Today roughly 30 million Japanese are on Twitter, putting the country in third place in the Twittersphere behind the United States and Brazil.

The prevalence of Twitter use in Japan was graphically illustrated in the aftermath of the 3.11 earthquake and tsunami. As Twitter was one of the few reliable communication tools still working in the affected areas, it proved to be instrumental in disaster monitoring and delivering rescue operations, as well as in the government's own communications efforts. Then Cabinet Secretary and government spokesman Yukio Edano became something of a Twitter celebrity in the weeks following the disaster through his ceaseless stream of tweets and the now-legendary hashtag #edano_nero (Edano, go to sleep).

After a while of following and reading Japanese tweets, I began to realize why this tool had become so popular in Japan - and how Japanese and other Asian languages have a systematic advantage over the likes of English in this digital domain. It's simple arithmetic. Spell out 'Shanghai' or 'Guangzhou' like this and that's eight or nine characters respectively, as opposed to two Chinese characters (上海 and 广州). In Japanese, the word niwatori (chicken) is eight characters in Roman script, as opposed to a single kanji (鶏). Even Korean, which uses a phonetic rather than a pictographic writing system, enjoys the same compactness. Type 'Pyongyang' in English and you've used nine characters. In hangul it takes two (평양).

The upshot of this, of course, is that in Asian languages, tweets often amount ot full-fledged blog posts. Consider the following tweet, which was translated by an anonymous tweeter in the aftermath of the Fukushima meltdown. Compare and contrast the original Japanese with the English translation:


The media is making a fuss about the radiation level, loudly saying it's 16 times the standard, but you would be exposed to the same level from a single PET/CT scan at a hospital. Isn't it enough to tell us not to stand for long periods in front of nuclear power plants? Just staying away from them is enough to be safe, isn't it?
The original tweet runs 87 characters, including punctuation, well below the 140 character cutoff. That same tweet translated into English, including spaces (of which Japanese conveniently has none), consumes 330 characters, more than twice the limit for a tweet. In terms of Twitter-ficiency, there's no contest between the two languages - it's Japanese hands down. And in a country long synonymous with pithy, compact wordcraft as best exemplified by haiku poetry, it's not hard to see why Twitter is the social media vehicle of choice. 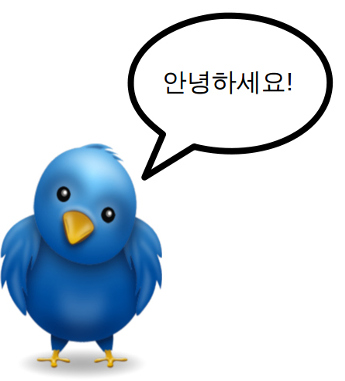 And it's not just Japan that's embracing microblogging with aplomb in East Asia. Since the launch of the Korean language version of Twitter in early 2010, Twitter use in South Korea has grown to 3.34 million users, with the country tweeting at twice the global rate. While South Korea's embrace of Twitter has not been without controversy, as seen in criminal cases involving allegedly pro-DPRK tweets, officials in Asia's fourth largest economy appear to be adopting a more relaxed attitude to the tool, as the recent overturning of a ban on Twitter use during national elections demonstrates.

Meanwhile, Twitter launched a Chinese language interface in September 2011. Although the service has been blocked in the People's Republic of China since 2009, Twitter is hoping to increase usership in Taiwan and Hong Kong (which have no such restrictions) as well as among overseas Chinese in Southest Asia and in the western world. Meanwhile, China's Twitter ban has resulted in a proliferation of homegrown microblogging services. Of these, by far the most popular is Sina Weibo (新浪微博, literally 'Sina Microblog'), a service whose prevalence in both Hong Kong and Taiwan presents a formidable challenge to Twitter.

The People's Republic vs. the Weibo Dynasty

In spite of the popularity of Sina Weibo and other microblogs, life for China's tweeters remains uneasy. China recently launched its toughest censorship move since the rise of social media, with Sina Corp and fellow microblogging platform Tencent temporarily barring users from commenting on other posts. The move came after an announcement that six people had been detained and 16 websites closed for spreading rumours about a military coup in Beijing, rumours allegedly circulated via China's domestic microblogs.

Web censorship in the PRC is, of course, nothing new. The Chinese Communist Party has long censored Internet content that it deems to be too politically sensitive, namely anything to do with the Tiananmen Massacre, Tibetan or Uygur independence movements, Taiwanese independence and political protests in general. Beijing officials also apply pressure on SM providers like Sina Weibo to do their own censorship. While the Chinese government doesn't make its blocked words public, Sina does - and currently has a list of 378 banned words. Here are a few examples:


In spite of the Chinese government's best efforts, however, censoring the microblogosphere is easier said that done - even in China. Moreover, here too Asian languages like Chinese present a distinct advantage (or disadvantage, depending on which side you're on) when it comes to communicating via Twitter and other Twitter-like tools - and skirting the censors while doing it. Chinese phonetics are such that many characters may share the same sound with a different tone (and a different character), making it relatively easy to disguise politically sensitive language. The censors eventually catch on, but the nature of the language makes it easier for dissidents to stay ahead of the authorities.

Finally, enforcement of the 'Great Firewall of China' has never been entirely consistent. Cracks in the wall  occasionally appear (followed by heightened suppression), during which time dissidents and ordinary Chinese netizens have been able to gain access to Twitter and other platforms for brief periods, and armed with a language crammed with pithy meaning-laden phrases that can fit within the character count of LMFAO, a flurry of well-crafted tweets can pack quite a punch before the fissure in the wall is sealed shut once again. Others, like famous dissident artist Ai Weiwei (@aiww), have parlayed their overseas renown into steady Twitter presences housed outside the country.

Currently, the crackdown against Sina Weibo and other microblogging platforms is at a fever pitch. All evidence points to a Chinese government in a state of panic over its perceived loss of control over its citizens' online communication.

While Chinese government officials may be bemoaning the proliferation of microblogging in their country, in Japan, one group of people that is surely applauding it is language arts instructors. Since the advent of text messaging a decade ago, older Japanese, and language arts teachers in particular, have complained about its perceived detrimental effect on the younger generation's use of kanji characters. The youth, they argue, have become increasingly sloppy in their writing, opting for trendy hiragana or katakana (phonetic) spellings of words rather than proper characters.

Twitter stands to reverse this trend - at least potentially. Consider a word like samazama ('various'), which in modern Japanese is typically written phonetically as さまざま. By writing it in the traditional kanji as 様々, you save yourself two characters. I have yet to speak to any Japanese language instructors about Twitter as an incentive for using well-crafted language, but I would be curious to know if Twitter's new-found ubiquity in Japan has had, from their perspective, a beneficial effect on the Japanese language. I suspect it's good news for the language of haiku.

Incidentally, a good number of contemporary haiku poets are now on Twitter. Among them is renowned haijin and Tenrikyo priest Kuniharu Shimizu, who composes poetry (and tweets) in both Japanese and English. You can follow him at @seehaikuhere.
Posted by Ben Freeland at 22:42