Yahwehpedia - The Bible as Precursor to Wikipedia 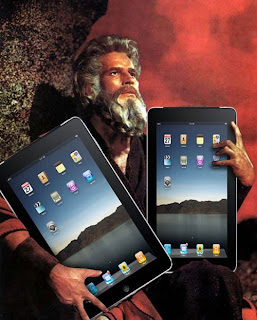 One of my most memorable undergrad courses was an introductory Old Testament/Hebrew Bible course I took as an extra credit course. The instructor - who introduced himself as a 'recovered fundamentalist' - introduced the topic thusly. He entered the classroom with a tape recorder, placed it on his desk and asked for a show of hands from the students assembled.

"How many of you believe in the Bible literally?" he asked. There was a peppering of hands. He then responded, "Okay, here it is." He pressed play and on came Genesis, Chapter One, Verse One - in the original Ancient Hebrew. He let it play for approximately 30 seconds and then paused the tape. "How many of you understood that?" he inquired. Not surprisingly nobody raised their hand. "Well, in that case I guess you can't take the Bible literally. And that's why you're in my class."

For those reading this post who do not adhere to literalist views of the Old and New Testament (and I'm guessing that's most of you), your response to this anecdote is probably one of "Duh, no kidding!" But it does beg the question of how one is supposed to grapple with what is indisputably the single most influential written work in the history of humanity. If not as literal truth, which it could not possibly be, how is one to approach the Bible? As a heavily sensationalized and politically biased history tome? As a work of historical fiction centred on a capricious, volatile-tempered supreme being? A chaotic amalgam of texts assembled by committee? None of these approaches seems quite satisfying.

A better analogy for the Bible, in my opinion, is the modern-day Wiki. In my previous post on children's fable, I refer to Jonathan Salem Baskin's wonderful book Histories of Social Media: 2,000 Years of Do's and Don'ts, in which he likens Wikis to premodern oral narratives, created by way of layer upon layer of input on the part of the storyteller. I would further argue that the Wiki concept applies perfectly to the creation of the Bible. This is particularly true of the oldest books in the Old Testament, which comprise the Jewish Torah, which are comprised of four distinct narrative layers - the Yahwist, the Elohist, the Deutoronomist and the Priestly strands - which together span three centuries of user contribution.

The Bible is of course not alone in this format. Most if not all major religious doctrines were created in this manner, through a layering of narratives over the course of centuries. But the Bible, as a result of its size and magnitude, must be considered the mother of all premodern Wikis - and therefore the Wikipedia of the ancient world. Consider that the Old and New Testament were created by multiple authors for the purpose of creating a one-stop compendium of everything these authors knew and believed to be true at that time. It covers a vast swath of topic areas, from law and order to farming techniques to poetry to pure adventure stories, centred of course on the primary focal point of the civilization in question - belief in Yahweh. 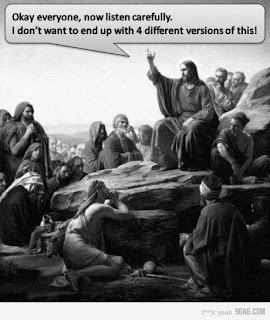 The New Testament retains the same format, focusing instead on one very big topic - the persona of Jesus of Nazareth. By this point, you basically only have four contributors left, although each may have been a committee of writers and editors under a single name. But still, there seems to be no shortage of competing views? Was Jesus actually the Son of God, as the Gospel of John clearly states, or is the Son of Man - whatever that means - a more accurate characterization, as the Gospel of Mark states. Was he the stern lawgiver as portrayed by Matthew or the gentle healer of Luke - or a combination of both? Unfortunately we have no real way of knowing because, unlike with Wikipedia, Christ's disciples weren't required to provide footnotes.

And then it all came to an end. Fearing that disputes within the new Christian faith would undermine the stability of the Roman Empire, the Christianized Roman Emperor Constantine summoned the Council of Nicea in 325 C.E. for the purpose of nailing down the Biblical canon once and for all. A decision was finally reached in 397 in Carthage, a full sixty years after Constantine's death. This brought to an end the open-source nature of the Bible in what would be the modern-day equivalent of shutting down Wikipedia from any further constribution and treating it as an online authority not to be tampered with.

Of course not everybody went along with this, and four centuries later Yahwehpedia 2.0 (also known as the Qur'an) was launched. While the Qur'an itself was not open-source, the innumerable Hadiths and other religious texts followed that very same Wiki-type format for several centuries thereafter and in a different form persists to this day in the form of the various fatwas issued by Islamic scholars throughout the Muslim world.

What does this mean? The Wikipedia model is, to my mind, a useful lens for examining the world's most important and controversial tome. Written over the course of centuries by a plethora of authors, each with their own particular slant but all striving for what they perceived to be accurate, the Bible is exactly what an ancient Middle Eastern version of Wikipedia would have looked like, grounded in contemporary understandings of how the world worked. Yes, much of it seems ridiculous to 21st century secular readers, but then again much of our present-day Wikipedia content will invariably look hopelessly ill-informed two millenia from now - should our species still be around at that time.

As for whether any or all of it was 'divinely inspired', I'll leave that hornet's nest alone. I will say, though, that if I were of a more religious disposition, I would be the first to champion the creation of a true open-source, democratic holy book for the 21st century built along the lines of Wikipedia. In sum, a true non-prophet organization.
Posted by Ben Freeland at 11:42