I looked in the mirror, Jim. And this is what I saw. 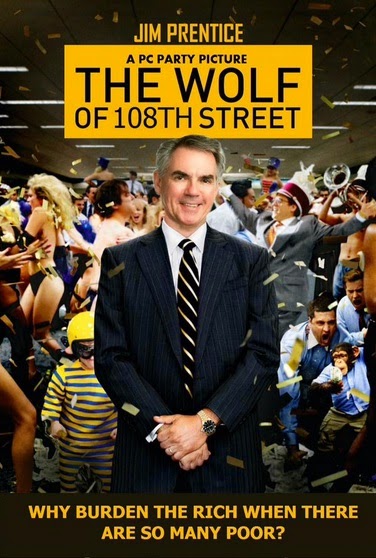 First of all, can somebody smarter than me please explain to me what the hell is going on in this province?? First we were suddenly broke and hemorrhaging money left, right, and centre thanks to sagging global oil prices. Then, somehow, inexplicably, the province was running a surplus. And now gas prices are back up to nearly a buck a litre. And wasn't the whole gas price slide a punitive measure by the OPEC bigwigs against the psycho KGB cowboy in Moscow and his pals in Tehran and Damascus? I don't get it.

Whatever the case, our boom-and-bust economy is now, apparently, bust again, and our esteemed crown prince now tells us, in a nutshell, that it's our own fault. According to Jim Prentice, we all have to “look in the mirror” and take responsibility for the province’s precarious financial situation. OK Jim, I take responsibility. But what I want to know at this juncture is how much responsibility I, personally, should take. After all, I'm not from Alberta originally and have only been taking advantage of government programs and opportunities here since mid-2008. Does that mean I'm less responsible for our present mess than someone who's lived here all their life, while at the same time more so than someone who just arrived?

If we were to portion out blame equally, among all Albertans, we would technically be looking at about 7.6 seconds of penance per Albertan per year. Given that there are now 4,146,000 of us in this province, and 365 days in a year, that's literally how our wages of guilt would be monetized. You know, like the flat tax our esteemed leaders still stubbornly stand by.

But that's based on the assumption that everybody currently living in Alberta is equally culpable for getting us in the pickle that we're in. Which, as I previously mentioned, strikes me as unfair given our current rate of population growth. Alberta's population grew by 3.8 per cent in 2014, which means that of the aforementioned 4,146,000 people, about 150,000 just arrived from elsewhere, and frankly it would be unfair to saddle them with this burden of economic shame. Especially given our provincial leaders' heretofore urgent tone with regards to impending labour shortages here.

This reduces our pool of culpable Albertans to around 3,996,000. That raises our individual burden of guilt to around 7.9 seconds. Still totally manageable. That said, I don't think our dear leader would see it that way. Clearly Alberta's urban centres bear more of the blame than rural areas, given their pesky demands for better roads, better transit, more schools, more . . . everything, frankly. As of 2011 (the most recent statistics available), 83 per cent of Albertans resided in urban areas. That takes us down to roughly 3,316,000 people who are really blameworthy. So if you've lived in an urban area in Alberta for more than one full year, you now officially have to feel bad for 9.5 seconds a year.

Not so fast. At least 20 per cent of the remaining population is 18 years old or under, and clearly they can't be held responsible for the mess we're in - much as we'd like to blame them. So that takes us down to about 2,652,800 culpable individuals, or about 11.9 annual seconds of penance. And that's more substantial - more time than most of us stand with our heads bowed and our eyes closed on Remembrance Day.

And of course we haven't even begun to talk about the province's urban Aboriginal population, from whose ancestors the land now called Alberta was stolen in the first place, or the province's ethnic Japanese, Chinese, Ukrainian (that's at least 10 per cent of Edmonton), and Afro-Canadian populations, who at various times have faced fierce discrimination. Or women, who, it turns out, earn less than 65 per cent of their male counterparts in this province, putting Alberta nearly on par with South Korea, the OECD country with the worst gender wage parity. And while we're at it, LGBTQ Albertans, who still suffer from de-facto top-down discrimination through the provincial government's refusal to mandate gay-straight alliances in schools, get a pass as well.

So who are we left with? Basically a coterie of overpaid straight white men who live in urban centres and occupy positions of power. In other words, people like you, Jim. Perhaps you need to, ahem, take a look in the mirror.
Posted by Ben Freeland at 00:16