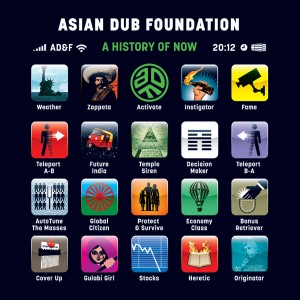 I don't generally do music reviews on this blog. It's not its raison d'être and there are far better blogs out there for audiophiles than this one. But I couldn't resist doing this one. Not only was Asian Dub Foundation's latest album my audio highlight for 2011 but it was also an album which, for whatever reason, fell completely through the critical cracks. Virtually nobody reviewed it. Here's my review, for what it's worth.

I first fell in love with Asian Dub Foundation in the late-1990s following the release of their critical breakthrough album Rafi's Revenge. At that time of their emergence, the Indo-British collective occupied completely unprecedented musical territory with their idiosyncratic blend of punk, rapcore, dub reggae, drum 'n' bass and Indian raggas and their angry-yet-nuanced lyrics that touched on everything from anti-Asian racism in the modern-day UK to Britain's colonial heritage in India and the social problems that continue to plague the Subcontinent today. Many pegged the band for eventual stardom along the lines of the Beastie Boys and Rage Against The Machine.

With all the personnel changes that the group has undergone in its 15-plus years of existence, Asian Dub Foundation has come to resemble a prog rock group along the lines of King Crimson or Genesis. Of the original six members, only three remain: guitarist Steve Chandra 'Chandrasonic' Savale and DJs Sanjay Gulabbhai 'Sun-J' Tailor and John 'Pandit G' Pandit. Enemy of the Enemy saw the introduction of percussionist Prithpal 'Cyber' Rajput whose dhol and tabla mastery gave the band far greater rhythmic depth, while Chandrasonic's brother Martin Savale eventually replaced Dr. Das on bass. As always, the new album features a lineup of guest artists, which this time around include female vocalists Shahla Kartouti and Kerieva, hip hop-influenced flutist Nathan 'Flutebox' Lee, string duo Chi-2 and a group of Cyber's own percussion students under the banner 'Ministry of Dhol'.

One reason why A History of Now received very little press was that the album was not paired with a tour - at least not in the western world. However, the new album was marked by a significant event in the band's history, namely its first ever tour of the band's motherland, a four-leg tour that began with an appearance at the Bacardi NH7 Weekender music festival in Pune in December 2010, will follow-up performances in Mumbai, Chennai and Delhi. ADF's first ever India may have set the tone for the new album, which provides some of the freshest, most energetic and most focused music we've heard from them in a decade.

The album's epic opener 'A New London Eye' establishes a fierce intensity that refuses to let up until the album's gentle eighth track 'Power of 10'. 'Urgency Frequency' is classic drum 'n' bass-heavy ADF that hearkens back to Rafi's Revenge, while 'London to Shanghai' is a charming 21st century travelogue underpinned by sampled Bollywood orchestra and Cyber's peppery tabla. The album's title track (a smart little song about digital media overload) features Aktarv8r at his verbal finest, while the subsequent 'Spirit in the Machine' (possibly the best track on the album) is a thundering instrumental jam featuring Cyber's Ministry of Dhol drummers and some steroid-fuelled riffs by Chandrasonic.

Other highlights on the album include the haunting, funereal 'In Another Life' (a number that evokes nighttime riverside funeral pyres in Varanasi) as well as the furious nu-metal-esque 'Futureproof', in which the band sounds like an Indian version of Pitchshifter. As is now ADF tradition, the album steers off for a track into decidedly un-Indian musical territory, this time into Tierra Latinoamericana with the Indigenous Resistance-themed 'This Land Is Not For Sale', featuring angry Spanish-language vocals from British-Roma vocalist Kerieva. And the album finishes with a decidedly un-ADF sounding piece of shoegazer dreampop reminiscent of Galaxie 500 or Cocteau Twins ('Hey Lalita'), possibly the closest this band has ever come to a bona fide love song.

It's not a perfect album. 'Where's All The Money Gone?' (Track 6) is probably the weakest number on the album, a retreat to the sort of tired leftist 'Occupy' platitudes that made Tank a less compelling album. 'Temple Siren' is a sludgy, slightly irritating statement on organized religion (or something like that) that doesn't quite hit the mark. But other than this, there is very little to fault the band on here. Among the few who have reviewed the album, some derided it for lacking the sort of undistilled anger that characterized their earlier albums. While this is unquestionably true, it's equally true that this is an older, more self-reflective band than the rage-fuelled sextet of Rafi's Revenge and Community Music. The big themes are still there but the lyrics are more philosophical and measured. And I'm inclined to think that they don't owe us anger all the time.

Even at their youngest and most petulant, Asian Dub Foundation always did an admirable job being even-handed in their political criticism. When criticized in some quarters for what was seen as focusing on anti-Asian racism and western imperialism while neglecting social problems within their own community, the band responded with '1000 Mirrors' on Enemy of the Enemy (memorably featuring Sinéad O'Connor as guest vocalist), a scathing indictment of misogyny and domestic violence in the Indo-Pak community. A History of Now carries on this tradition with 'In Another Life', an obvious commentary on poverty and caste in India. At the same time, their tireless solidarity with oppressed peoples around the world continues on with 'This Land Is Not For Sale', a track that will surely score them a continued following in Latin America.

There's more I'd like to see ADF do. While the band has notably stayed away from the Israel-Palestine conflict (and refreshingly refrained from any discernible Israel-bashing), it would be nice to hear ADF take a stance against Islamist extremists in the wake of cartoon and video controversies and continued religious violence in the Middle East. Coming from a band with a strong following on the ideological left and at least a couple of members of Muslim background, such a statement would pack quite a punch. I would also love to see these boys confront the enduring homophobia and LGBT discrimination within South Asia and the diaspora, particularly given recent moves by LGBT groups in India to push back the tide of homophobia. Guys, if you're reading this, those are my thoughts.

Requests aside, A History of Now is Asian Dub Foundation's strongest album in a very long time, both musically and lyrically. It's certainly their best material since Community Music - and certainly a more evenly excellent album than Enemy of the Enemy or Punkara. It's an album that points to a very bright future for these now-firmly middle aged Desi electro-Bhangra-punkers as they bang and riff their way into what looks to be a tumultuous decade both at home and around the world. This band's rediscovery of its old moxie is not a moment too soon. A revitalized Asian Dub Foundation might be exactly what this angry and confused world needs right now. ADF Zindabad!