On Bullying and Misogyny (In Memory of Amanda Todd) 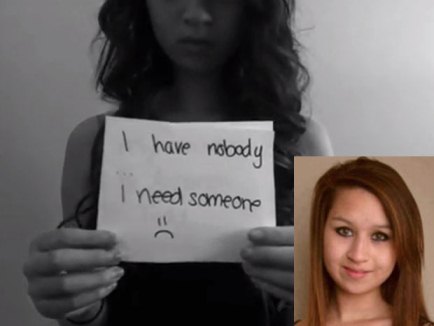 The suicide of bullied Metro Vancouver teen Amanda Todd has generated yet another media frenzy over the epidemic of cyberbullying. In the case of Amanda, the 15-year-old from Port Coquitlam left behind a chilling YouTube PSA in which she recounts how her tormentors forced her to switch schools on multiple occasions (which did nothing to remedy the situation) and ultimately drove her to drugs, alcohol, seclusion and self-harming before ending it all. For those of you who haven't seen the video, you owe it to yourselves to see it.


The media's reaction to Amanda Todd's death has been depressingly predictable: outrage of the "How could this possibly happen?" followed by the predictable cacophony of proposed solutions to the epidemic of cyberbullying. As always, some called for increased policing of the web, others for greater bullying awareness campaigns in the school system. Some blamed parents and teachers for not doing more to stop it. Others callously opined that bullying is simply part of the natural order of things and that she got what she deserved. And as always, much of the focus remained on the need for teens to be careful while online lest they make themselves vulnerable to online tormentors.

The really depressing part, of course, is that Amanda Todd will soon be largely forgotten - apart of course from her grieving family and friends, who will never forget. And the frenzy of cyberbullying will quickly subside...until the next Amanda Todd pulls the plug on his or her life and the process begins again. And then of course there are the victims whose names and faces never make the pages of the National Post. Canada's youth suicide rate remains troublingly high. And while the rate is still higher for boys than for girls, the suicide rate for girls has jumped over the past few decades, while the rate for boys has decreased. There are thousands of Amandas out there. And far too many will leave this world unknown, with no YouTube account of their torment.

There can be no denying that the Internet, and social media in particular, has made the problem of adolescent bullying more insidious and difficult to combat. Not only does it allow perpetrators to remain anonymous, it also provides them with a far wider dominion over their victims. When I was a junior high schooler in the early 1990s, a change of school was generally a surefire tactic for curtailing bullying; while one still had to content with being friendless at a new school, at the very least it meant an escape from the devils of the old school. For modern-day teens like Amanda, changing schools offers no such escape. The web has even allowed her tormentors to target the girl's online memorials. Some sort of 21st century equivalent to the Greek Defixiones might be in order.

But while the 'cyber' element has made the problem of bullying scarier and more complicated, the root of the problem remains the same. Bullying is - and always has been - a societal means for maintaining a hierarchical status quo by punishing those who dare to overstep their bounds. It's also a means for placating the 'masses' with the occasional human sacrifice, playing into the dark side to our human nature. (Think Apocalypto in the schoolyard.) It's the 'mild' first-world tip of a very large and sinister iceberg that in other parts of the world manifests itself in the public lynching of gays and the spraying of schoolgirls with battery acid for having the audacity to seek out an education. And as always, those who fall outside of the default group (women, members of cultural, racial or sexual minorities, social misfits etc.) who bear the brunt of it.


"She flashed, felt repercussions, her own fault."

- Anonymous online commenter
The bullying of young girls like Amanda Todd is especially troubling inasmuch as it highlights the yawning gap between our society's post-feminist discourse and notions of equality and the harsh underbelly of misogyny that continues to contaminate our social relations. Granted, the Amanda Todds of the western world are no longer liable to be burned at the stake (as they might have been in Europe 500 years ago) or stoned to death (as she might well have been in modern-day Afghanistan or Somalia), but the horrible bullying to which she was subjected bears the same malevolent misogynist streak that motivated - and continues to motivate - such atrocities. The Amanda Todd story exemplifies the degree to which a great many men (and sadly many women) still view women within the passive virgin-whore dichotomy and consider those who lose their footing on that tightrope to be deserving of cruel censure.

So what are we to do about it? Sadly, there are no obvious cures. My own proposed radical solution for gender equality is not one that I'm expecting anybody to embrace anytime soon, namely a 50-year moratorium on male voting. Under such an edict, men would still be eligible to run for office but would have to be answerable to a female-only electorate (in a similar fashion to how chiefs and warlords within the Iroquois Confederacy were answerable to a council of women). A 50-year period would be long enough to produce profound change but short enough to remain within people's historical memory, a time period similar in length to the beginning and end of the Cold War, the rise of the Asian Tigers and the unfolding of the New Europe. And suffice it to say, 50 years of female rule would pale in comparison to 4,000 nearly uninterrupted years of patriarchy, but then again the goal is equality, not supremacy.

Getting back to the problem of cyberbullying, it bothers me that the onus is always placed on the victims to protect themselves against abusers while the abusers, and the complicit onlookers, invariably escape unpunished. While it is of course important for children and adolescents to be taught how to protect themselves online, it's about time more altruistic IT-savvy people stepped up to the plate and confronted this online terrorists head on. I was recently inspired by a story in the Guardian by Irish journalist Leo Traynor, in which he recounted his own tale of online abuse and how he enlisted a hacker colleague of his to track down his abuser - who turned out to be the son of a colleague with a head full of bad wiring. We need a Hackers Without Borders-type organization, a crack squad of angry nerds (who you would think would be natural allies in in this cause) to scare the crap out of would-be online tormentors.

At the same time, we need a 'coming out' campaign for former bullies seeking to make amends. In the aftermath of Amanda Todd's suicide, many commentors have come forward with their own stories of bullying and harrassment. For any sort of restorative justice to occur, those who are saddled with the burden of having been bullies or passive bystanders need to make themselves known, ask for forgiveness and then take part in combatting the problem. Just as the onus of gender equality cannot exclusively be placed on the backs of women, I don't see how anti-bullying campaign are to make any headway without the involvement of former perpetrators. At least one bully did just this in the aftermath of Amanda Todd's suicide. A good start, but far more of this is needed.

We should all be mad as hell about this - and about our society's ongoing contempt for women and girls who fail to meet mainstream culture's unspoken but understood expectations to be sexy-but-not-sexual, compliant to patriarchal strictures and vigilant in defence of their own purity. And for the sake of online freedom (and not ruining it for everybody else), we need to get tough on cyberbullies. Censoring the Internet will not curb bullying anymore than veiling and secluding women reducing instances of sexual assault, as conservatives in the Islamic world are fond of arguing. As a society we are capable of being better than this, but we won't get there without taking a long, hard look at the poisonous attitudes that persist within our supposedly progressive culture.

And for the love of god, please stop blaming social media for this! Yes, SM is a double-edged sword that makes the issue of bullying more complex, but it's not the crux of the problem. And besides, were it not for social media, none of us would be talking about Amanda Todd right now, as her excruciatingly eloquent YouTube statement could never have been made and disseminated around the world in the first place. Social media is not to blame for this. Misogyny and its never ending capacity to inflict unnecessary human misery is to blame.

In the meantime, my heart goes out to the girls family and friends, for what it's worth. Needless to say no words could ever even begin to take away the hurt.
Posted by Ben Freeland at 14:53