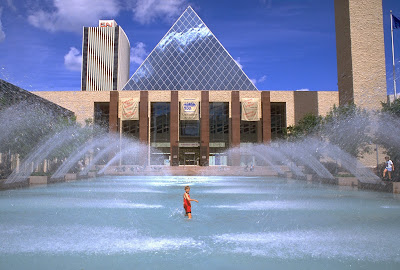 As many of the people who follow this blog will know, 2013 was a watershed year for the city of Edmonton in a number of ways. Not only did it mark the end of Stephen Mandel's transformative nine-year tenure as mayor, but it also a number of key civic issues finally laid to rest, including the new arena, City Centre Airport and the Churchill-NAIT LRT line. It was the year Edmonton declared war on 'sprawl', fought publically with Air Canada, watched with amusement as our outgoing mayor chewed out everybody from Councillor Kerry Diotte to the city's transportation department to the National Post's Chris "Twitchy-Eyed Savage" Selley and elected a button-cute civic boy scout to the city's top job.

So how do we top such a highlight-laden year? Well, Omar Mouallem of Metro Edmonton offered five suggestions of bad Edmonton habits he'd like to see broken in 2014. While I agree with Omar on all of them, four out of five (complaining to the mayor about roads, using the word "revitalization," NIMBYism toward affordable housing and constantly moaning about being "busy") probably apply to a great many cities. But it's an excellent start, and one that I would like to take further with my personal list of five New Year's Resolutions I'd like to see the city of Edmonton take on.

Edmontonians, let's be honest. You don't really hate Calgary that much; you just think you do. Calgary is actually a fine city, and according to the world's quality of life indecies, it's indeed one of the nicest places to live on the planet. It may be a bit more go-go-go than Edmonton and it's definitely got more money, but that hardly makes it the Abode of Satan. And frankly, the more you moan about Calgary-this and Calgary-that, the more insecure you sound. We've already broken the 'Calgary Habit' in economic and infrastructural terms. Let's now break the Calgary-hating habit. After all we're all in this provincial economy together and we both have smart, charming mayors with good ideas. Let's try working together for once.

While there's been a lot of progress made, Edmonton is still a world-class city with inadequate public transportation. And as the city continues to grow, both population-wise and economically, this is becoming more of a problem, as it makes it very difficult for young people and others working in lower-wage jobs to actually commute to where they're needed, while clogging up streets (and city air) with single-occupancy cars. A big part of the problem is the fact that all of the municipalities in the Edmonton region have their own transit plans (or in some cases no transit at all), making it exceedingly difficult to commute from residential areas in Edmonton to, say, Sherwood Park or the Acheson industrial area, and so on. For regional transit to work, all the municipalities need to get together to develop an integrated system, and this year would be a great year to start.

3) Get serious about affordable housing.
﻿

While I've been a supporter of the redevelopment of the ECCA lands for a new mixed-use neighbourhood since it was first proposed, I confess that I haven't been thrilled with the actual proposals, inasmuch as it's going to be a whole lot of expensive condominium developments aimed at the well-heeled segment of the city's population along the same lines as Windermere and other new developments. As Omar Mouallem astutely points out, this city has a real NIMBY problem when it comes to affordable housing, and this really needs to change. And not just for altruistic reasons. Unless Edmonton can solve its chronic shortage of affordable housing options for service-sector workers, the city's robust economic growth will soon peter out. It's in everybody's interest to fix this enduring problem.


4) Develop a sense of humour.

Edmontonians are funny people, but we're not particularly good at laughing at our own city. Last summer when National Post wag Chris Selley jokingly referred to Edmontonians as a bunch of "twitchy-eyed machete-wielding savages" the city went nuts on social media, and the usually sharp-witted Mayor Mandel responded in a manner befitting, well, a twitchy-eyed machete-wielding savage, frankly. Seriously, people, are we really that insecure about our status as a city that we can't deal with being called a more linguistically rich J-school educated equivalent of 'Mr. Poopypants'? Can't we own our city's clichéd reputation for being a desolate, uninhabitable shithole? We all need to work on that.

Back in December of 2012 I wrote a post called "How To Drive Like An Edmontonian" in the hopes of bringing more attention to some of the city's less-than-admirable driving habits. While the post was by far my most popular ever, it appears to have done little to improve the quality of driving in the city. In particular, people still tailgate. A lot. Even on slick winter roads on the Anthony Henday while travelling at over 100 km/h. For the love of God, please stop doing that! It's dangerous at the best of times, and exponentially more so in winter. Of all the bad road habits in this city, this is the one I'd most like to see disappear.

Edmonton is home to the country's fastest growing urban Aboriginal population, and is predicted to overtake Winnipeg as Canada's most Aboriginal major city within the next few years. However, the city has a long way to go before its fastest-growing minority group is truly embraced as part of its cultural mainstream. Ever had an Indian taco at Bannock Burger on 124th Street or partaken in Cree language classes or cultural programming at the Edmonton Native Friendship Centre? There are innumerable pockets of First Nation and Métis cultural life in Edmonton, but sadly it's all but off non-Aboriginal Edmontonians' radar. Which is particularly unfortunate given the rising tide of Aboriginal identity politics by way of Idle No More and other movements and the growing friction between Native and non-Native Albertans over the future of the Athabasca Oil Sands and other controversial resource projects. If there was ever a time for non-Aboriginal Edmontonians to start truly getting to know their indigenous neighbours, that time is now. And fortunately it's never been easier.