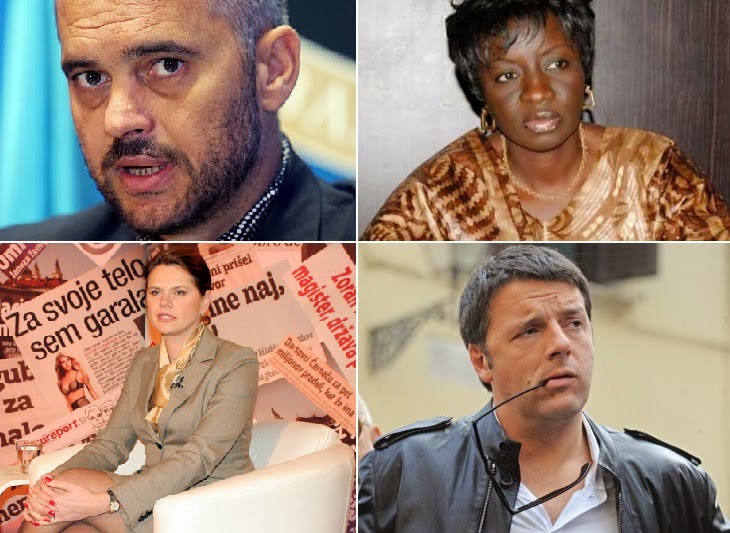 Last January I ushered Brush Talk into tabloid territory with my still-popular Sexiest World Leaders of 2013 post. Given the overall dearth of homages to the hottest honeys at the highest echelons of global governance (and people's apparent enthusiasm for the subject), I felt it only fair that I update the list, given that two of the ten on last year's list are no longer in power and one other is hanging by a thread in the midst of renewed anti-government protests in her country (who still managed to find her way onto this year's list).

Four out of this year's ten are repeats from last year. Six are newcomers to the list. And with respect to the still-hunky leader of the Free World, we still think you're sexy here at Brush Talk but we gotta clear space for some new players here, and seeing as you have no trouble getting attention out in the world, we're going to give you a pass this time. Nothing personal.

So here it is, this year's 10 Sexiest World Leaders:

Sigh.....the only three days ago the tiny and epically beautiful Himalayan kingdom of Bhutan celebrated the 34th birthday of their beloved "Dragon King", Jigme Khesar Namgyel Wangchuck. And why not? The long isolated and impoverished mountain kingdom is undergoing a democratic renaissance with commensurate improvements in standard of living. Social media is radically transforming the country (over 10% of its population is now on Facebook) and embracing 21st century technology in a characteristically Bhutanese Buddhist fashion, such as partnering with Nissan to promote electric cars in the country. And at the helm of all this is Asia's hunkiest head of state - together with Asia's hottest first lady, Queen Consort Jetsun Pema. Who would have thought Bhutan would ever be the envy of the world?


2) Alenka Bratušek
﻿﻿﻿
Before the global economic crisis of 2008, Slovenia was enjoying a halcyon period as one of the star economies of the New Europe, the first of the former Yugoslav republics to join the European Union and the Eurozone. In the years since the crash, however, it's been in a state of fiscal Armageddon, plagued by insolvent banks and a heavily indebted public and private sector. However, things have begun to look up for the tiny country wedged between the Alps and the Mediterranean under the leadership of centre-left Prime Minister Alenka Bratušek, whose ambitious platform of surgical spending cuts and protection of social programs has won her plaudits both at home and with the IMF since taking over in early 2013. Following her election, one right-wing opponent chided her skills (and her wardrobe), saying her government would last no longer than her miniskirts. A year later, the pouty, pugnacious PM is still in power, and her country is looking all the better for it.

This week as been a good one for the still relatively young and untested Mexican president Enrique Peña Nieto, what with the capture of notorious drug lord Joaquin "Shorty" Guzman by Mexican marines in what as been lauded as "an impeccable operation." But even before this week's good news, Mexico's young leader had already been enjoying a growing reputation as a canny administrator and a shrewd economic steward, overseeing steady economy growth thanks to a manufacturing and tech boom and strengthened trade within the NAFTA zone - as well as an improving law and order situation. Only this month Mexico became only the second Latin American country to earn the much-coveted "A" grade credit rating from Moody's, which certainly bodes well for the country's economic future. If nothing else, Peña Nieto's first year in office has shown he's more than just a pretty face. Which nobody would dispute he is.

She's baaaack! After over two years behind bars on a dubious (and without doubt politically motivated) conviction of abuse of power, Yulia Volodymyrivna Tymoshenko, the economist-turned-oil and gas tycoon-turned-post-Orange Revolution prime minister has been released from prison in the wake of this year's anti-government protests in Ukraine, and is once again a player to contend with amid her country's current political chaos following the disappearance of President Viktor Yanukovych. But while her role in the 2004 Orange Revolution and her imprisonment have made her a heroine among a vast swath of Ukrainians, the 2014 revolution, by contrast, took place without her, and some have dismissed her as an old-style politician whose patrician style no longer chimes with a modern country with a vibrant civil society. Still, the Princess Leia of Eastern Europe is still a force to contend with. And she still looks the part, we have to say.


5) Helle Thorning-Schmidt
﻿
Yep, we still love Helle Thorning-Schmidt, especially after her priceless selfie moment with Barack Obama and David Cameron at the funeral of Nelson Mandela, which, predictably, incurred a barrage of sexist and puritanical outrage on the American right. But there are all kinds of other reasons to love Denmark's charming and ravishing prime minister. The centre-left leader of Denmark's Social Democratic Party is considered a frontrunner for the presidency of the European Commission and her staunch advocacy of Danish adoption of the euro, while controversial at home, has won her plaudits within the European Union with the promise of infusing a dose of Danish-style compassionate pragmatism into the Brussels bubble. Sure she gets some grief for her expensive fashion tastes and her favourable tax arrangements thanks to her blue-blooded British husband Stephen Kinnock (who most recently has been the target of tabloid rumours about his sexual orientation). But clearly Europe's most glamourous head of government is doing something right; last year's World Happiness Report crowned Denmark as the world's happiest country. And thanks in no small part to Ms. Thorning-Schmidt, it's certainly one of the sexiest.

﻿
﻿
It was only a matter of time before the charming and multitalented Edi Rama became prime minister of his long-beleaguered corner of southeastern Europe. A former basketball player-turned-professional artist (and occasional rapper)-turned mayor of Tirana, Rama rose to prominence for his radical overhaul of the Albanian capital, demolishing the worst of the city's Communist-era buildings and illegally built structures, widening roads, planting trees and - most famously - painting the city in bright pink, yellow, green and violet in what became known as "Edi Rama colours." Like Thorning-Schmidt, Rama is no stranger to controversy, from his reputation for insulting people over social media to his penchant for nudism. But his well-earned reputation for getting things done saw his Socialist Party and its coalition partners elected to a solid majority in June of last year on a platform centred on fighting crime, modernizing public services and EU integration. Only time will tell if Mr. Albania can work the same charm on the country that he did for its capital.

Albania may be one of Europe's poorest nations, but it's still worlds ahead of the western hemisphere's poorest nation, Haiti - a land that was already destitute before the horrendous 2010 earthquake destroyed what little remained of its moribund economy. But while nearly 200,000 people remain homeless a full four years after the quake, there appear to finally be signs of stabilization and economic growth in the perpetually tragedy-stricken Caribbean nation. Tourism is on the rise in the country, as are mining and manufacturing, and an ambitious reforestation program is underway, which hopes to rebuild the country's devastated forests and in doing so control landslides. At the helm of post-quake Haiti is former "Kompa" music star-turned politico Michel "Sweet Micky" Martelly, a guy who, at the very least, has helped restore hope and optimism to a country with very little of either. After having suffered through an evil medical doctor, a corrupt priest and an incompetant agronomist in the presidential palace, the suave and sexy Sweet Micky has been a welcome change.


8) Aminata Touré
﻿
The west African republic of Senegal has undergone a political sea-change in recent years. In 2012 the country's geriatric strongman Abdoulaye Wade surprised many at home and abroad by stepping down without a fight following his electoral loss to petroleum engineer-turned-legislator Macky Sall, a dour leader with a reputation for transparent dealings. But while Sall may lack colour and charisma, his prime minister since September 2013 most definitely does not. Dubbed Senegal's Iron Lady, Aminata Touré is a ex-campus Marxist best known for her family planning work in Senegal, Burkina Faso and Côte d'Ivoire, her staunch advocacy of women's rights and her athleticism - she was once a star player for the Dakar Gazelles soccer team. She's even courted controversy in the conservative country by appointing a justice minister who has spoken out in favour of decriminalizing homosexuality. She's new to the job so it remains to be seen how she'll fare at it, but we already love her - that's for sure!

This past year has been a rough one for Thai PM Yingluck Shinawatra, the former telecom tycoon whose controversial brother Thaksin was deposed in a military coup in 2006. Most recently the beleaguered premier has pledged to stay in power in the face of widespread protests against her government, which are now in their fourth month. That said, Yingluck has performed better as prime minister than many people expected and still enjoys widespread support, particularly in the rural areas that have benefitted from her government's generous rice-buying scheme, which has helped lift many farm families out of poverty. With an election already overdue (postponed due to the protests), Yingluck's fate is anybody's guess - she could be out of a job tomorrow or she could hang onto power for a while longer. Whatever the case, she'll still be one of the sexiest world leaders in recent history, as was her dashing predecessor Abhisit Vejjajiva. Good looks, it would seem, only get you so far in the Land of Smiles.

The newest kid on the sexy world leaders block, Matteo Renzi, who this month became Italy's youngest ever prime minister at age 39, now faces the job of running a country that goes through prime ministers like underpants and whose top job has in recent years vacillated between a cluster of ineffective bureaucrats and a pervy billionaire who ran the country's economy into the ground. But the dashing former mayor of Florence, whom the media dubbed "il Rottamatore" (the scrapper), is certainly not lacking in ambition or vision. A vociferous critic of old-style Italian politics, Renzi famously opined that all Italian politicians of the same generation as Berlusconi should resign. Frequently compared to Tony Blair for his youthfulness and his ambition to drag his leftist Democratic Party more to the centre, he's already become the subject of Internet memes comparing him to Fonzie from Happy Days. Nobody knows how he'll do in the long run. After all, Berlusconi was once a charming young bad boy too.

Who will still be around for consideration in next year's list? Tune in again in 2015!
Posted by Ben Freeland at 14:00