Asking For Money – 11 Fundraising Lessons from the IABC Leadership Institute 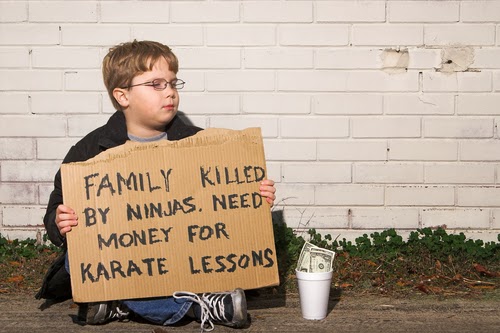 This is the first in a series of posts on takeaways from the 2014 International Association of Business Communicators (IABC) Leadership Institute conference, held in New Orleans from February 6 to 8. Stay tuned for more highlights from this exciting event. (Photo: Shutterstock)

It goes without saying that most people aren’t particularly fond of – or comfortable – asking others for money. The same is true of the majority of IABC chapter sponsorship directors, which is a pity given that their job is, well, to ask people to give the chapter money. As a newcomer to the sponsorship portfolio of the Edmonton chapter, it was with great relief that I learned that many of my counterparts in other chapters around the world were struggling with many of the same problems I've faced. But most importantly, I was thrilled with the volume of information I was to receive.

Communications sponsorship guru and IABC fellow Barbara Puffer is not among those who struggle with asking stakeholders for money. At her session on sponsorship strategies for IABC chapters, she prefaced her presentation by saying “Unlike most people, I actually do enjoy asking people for money.” Her trick? Identifying and highlighting clear value propositions and creating finely tailored sponsorship categories. In other words, having a clear plan and sticking to it. Her approach clearly works; with a very small team her Heritage Region chapter was able to raise over $100,000 over a four-year period, including a remarkable single-year high of $58,000!

Puffer outlines the keys to a successful sponsorship in her seminar handout IABC Fundraising 101, a single-page guideline that she and her colleagues compiled over their years of research and trial-and-error. Here are the 11 tips she prescribes to the beginner sponsorship person.

Before picking up the phone or sending the proposal, identify your value proposition. What’s the big idea? How would sponsorship of your chapter, workshop, webinar, website, awards program or event be meaningful to your prospects and their organizations?

2. Sell what’s most marketable, not what needs funding.

Just because you need money to put AV or a web hookup in a presentation room, does not mean that is necessarily what you should be selling. Your strongest assets may be something else entirely, such as access to your influential board of directors and the opportunity for year-round promotions to your membership community. Many sponsorship fees—unlike some philanthropic donations—are unrestricted.

3. Base fees on value, not budget.

The fee must be commensurate with the rights and benefits being delivered, which may be more than the budget of what’s being sold.

Focus on the prospect’s need to build their business or visibility for his or her brand, message or something else. Do not expect a prospect to wade through a data dump to figure out what they want.

5. Be fair about the packages.

Give prospects a reason to buy at the highest level. Reserve key benefits for your biggest sponsors. Create clear differences for sponsorships at higher and lower levels.

Identify what your prospect wants to accomplish and who they want to reach. Think about their hot buttons and budget priorities. Some may not want an exhibit table at your event; for another, that might be key.

7. Don’t send a proposal until after the initial discussion.

You’ve gotten the name of a prospect. It's best to be introduced from the inside.  Does an IABC member work there?  Who's the right person to speak to about sponsorship? Who is the decision-maker. This is not the time to create a full-blown proposal. Instead, use a one-pager or short email. Be clear on their budget, objectives, timing and process, if you can. Once you’ve connected regarding interest, you are ensured that you are heading down the reasonable path, it’s time to send the proposal.

8. Go to everyone in the category at once.

Once you understand the category, do not send out proposals one at time -- waiting for the first prospect's response -- as it will take you considerable time to wade through the category. If there’s a fit for one organization in the category, likely you can apply it to the others. Who signs on first might surprise you! If you have an "exclusive" or a one-of such as "presenting sponsor,"  by all means wait a bit and cultivate him or her longer.

9. Have a media plan first.

Having media exposure is very important to prospects looking to IABC for possible sponsorship. Know ahead of time what you'll be doing and who it will reach. You can always add and discover new avenues later.

10. Put a deadline on your offers.

There are only three acceptable outcomes of any call or meeting: yes, no or definite next steps. Next steps might include getting the go-ahead to prepare a final proposal and invoice. Or it might only be scheduling a time/date for the next discussion.

Sponsorship sales are partially a numbers game; many sponsorships start with a cold call. Sponsorship sales require lots of follow-up and hand-holding. Keep a master list of everyone contacted, when they commit (or not) and any other details that may be needed for future reference.

For more on Barbara Puffer, ABC visit her website at Puffer PR Strategies.
Posted by Ben Freeland at 13:48