This is the first in what I hope will be an ongoing series of performance reviews for New Music Edmonton. For those of you familiar with NME, this 25-year-old arts organization is Edmonton's leading promoter of new and experimental music, with a particular focus on new works by Canadian composers. By reaching out to new audiences through new performance spaces, NME continues to do what Edmonton's artists and arts promoters have always done: bring daring new creative works directly to the people without a shred of pretense or elitism.

That said, NME was, until recently, completely off my radar - until I was approached by NME President Ian Crutchley about reviewing its current concert series. That's the trouble with Edmonton: too many shows but not enough PR, with our artists generally too humble to blow their own proverbial trumpets. But as I argued in my review of Mile Zero Dance's most recent Salon Series performance earlier this month, most Edmontonians have no idea what an artistic treasure trove our city is. Consider this review series my own humble attempt to do it justice.

Last night's NME concert at Muttart Hall featured Ensemble Transmission, a dynamite sextet from Montreal and the current ensemble in residence at the historic Chapelle du Bon-Pasteur in the heart of the city's arts district. (Montreal's arts and culture organizations have been the saviour of the city's innumerable old churches in an era where barely anybody attends mass anymore.) Founded in 2008, Ensemble Transmission consists of flutist Guy Pelletier, clarinettist Lori Freedman, violinist Alain Giguère, cellist Julie Trudeau, percussionist Julien Grégoire and pianist Brigitte Poulin - and for this performance was joined by Toronto-born, Berlin-based electro-acoustic composer Chiyoko Szlavnics on live electronics for two of her new works.

The show, while perhaps not for everybody's tastes, was nonetheless very eclectic. The opening piece Reimsix by clarinettist Freedman seemed to consist of a series of prickly, cut-up statements (none more than 30 seconds in length) with shrieking sforzandos and tonal extremes more reminiscent of Ornette Coleman or Albert Ayler than of the avant-garde classical cannon. This was followed by Omaggio a Burri by Italian composer Salvatore Sciarrino (probably the best known of the bunch), a delightful trio for alto flute, bass clarinet and violin featuring various extended techniques, including percussive effects by the two wind players.

The third piece Feuilles à travers les cloches (Leaves across the bells) by French composer Tristan Murail was among the concert's highlights, a haunting, spectral work clearly inspired by Debussy for flute, violin, cello and piano that seemed to eerily capture the cold darkness of Edmonton in February with its dark piano intervals, chilling flute vibrato and incessant violin pizzicati. This was followed by more new music from Italy, Il volto della notte (The Features of the Night) by Paolo Perezzani, a playful and sarcastic trio for flute, bass clarinet and piano that swings from pure cacophony to sublime lyricism.

After a short break the concert continued by two new works by ex-pat Canadian soundscape artist Chiyoko Szlavnics, Openings I and Constellations IV, both world premieres commissioned by New Music Edmonton. In stark contrast to the dense atonalism that characterized most of the first half, Szlavnics' twin works were characterized by sparse intersecting planes inspired by artwork - very much reminiscent of Ligeti's works from the 1960s and 1970s. Constellations IV was particularly striking, a crystalline creation that seemed to conjure up the winter night skies of northern Alberta.

The performance concluded with another Italian work, Encore / Da Capo by Luca Francesconi (a pupil of Karlheinz Stockhausen and Luciano Berio), which completely shifted the tone again to almost a party atmosphere with a toe-tapping pulse and dramatic crescendos in which the sextet managed to sound like a full orchestra.

For the record, I enjoyed the performance much more than Edmonton Journal reviewer Mark Morris did. While I agree with him that the works performed were less groundbreaking than they were a throwback to the avant-garde chamber music of the 1960s, I found the performance to be thoroughly warm and engaging. I would like to have heard it in a cozier, less staid performance space (perhaps the UniThéâtre), but there are only so many concert spaces in this city for all the ensembles and troupes lining up to use them. My feeling is that any lack of warmth or humour on display last night, such as Morris alleges, was much more to do with the venue than the performance itself.

Like Mile Zero, New Music Edmonton should be applauded for bringing challenging art to the masses via social media, inventive choices in venues and sheer grim determination - not to mention the unwavering support of backers like the Alberta Foundation for the Arts, the Edmonton Arts Council, CJSR Radio and, in this case, the Wee Book Inn - and beloved Edmonton literary institution with three locations in town. While the music of Ensemble Transmission is certainly not for all tastes (and indeed not all the music they do is up my alley), there are far more people out there interested in this sort of out-there music and art than there were in the audience, and it actually wasn't too bad a turnout for a crappy Friday night in February in Edmonton.

Edmonton may be cold and sprawled out and have inadequate public transportation, but don't let anyone tell you we're uncultured here. And if you live in Edmonton and are a fan of out-there musical experimentation - and aren't already acquainted with New Music Edmonton (as I wasn't until recently), please check out their website as well as their Twitter and Facebook pages. Groups like this need all the support they can get. 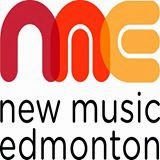