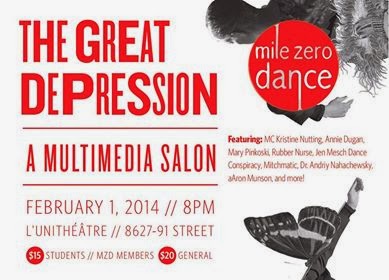 When it comes to the arts, most Edmontonians have no idea how good they've got it in their own backyard. Sure we've got our summer festivals and our world-renowned symphony orchestra and a Ukrainian dance troupe or two, but that barely touches it. Edmonton's arts scene is as lush and untamed as the vegetation of its river valley (the longest interconnected urban park system in North America), and on any given Saturday night you can walk into any given theatre or live house and be pretty sure of hearing something either inspired or highly skilled or, more often than not, both.

Consider Edmonton's own Mile Zero Dance. One of the city's best kept secrets for over a quarter century, MZD is its own festival - and one that doesn't shut down during the summer. For those who haven't had the pleasure of seeing them, MZD is a dance troupe best known for their irreverent avant-garde performances (often in public places) that have ranged in style from the NYC José Limón school in the 1980s to the macabre world of Japanese ankoku butoh and Noguchi Taiso under the stewardship of current artistic director Gerry Morita. They've also - with very little fanfare - emerged as one of the greatest promotional platforms for the city's most outlandish artists, both within and outside the medium of dance, through their cabaret-esque 'Salon' performance series. For a newcomer looking to sample Edmonton's wildest creative output, Mile Zero's Salons are a great place to start.

MZD's latest Salon-series performance, The Great Depression, was held last night on a suitably bleak late-January Edmonton evening at L'UniThéâtre, the cultural and artistic hub of francophone Edmonton. The theme: depression, both the 'great' one and the psychological condition by the same name, and how great they are. Yes, both of them. At a time when Edmonton's well-heeled denizens are plotting their latest escape to Manzanillo or Maui and the rest are commiserating about the frigid darkness on Facebook, MZD urges us, in Morita's words, to "find new ways to break the spell of winter and embrace our creative collective with the talented artists among us." In other words, creativity will keep us warm. And if The Great Depression is any indication, it certainly can. At least in this town.

The show opened with "Psychology of a Strip Tease" by MZD fellow traveller Jeannie Vanderkhove, which featured a remarkably compelling 'reverse' stripper routine (yes, involving getting dressed and complete with backwards burlesque music). This was followed by a very matter-of-fact appearance by Edmonton poet laureate Mary Pinkoski, who delivered two of her trademark poetic torrents on the show's subject matter.

This was followed by a brutally intense dance performance by Edmonton's own Jen Mesch (of the Jen Mesch Dance Conspiracy) entitled "Anna and the Other Anna" featuring the noise soundscape accompaniment of Edmonton-based sound artist Scott Smallwood - a performance that more than any captured the grinding blackness that I've always associated with the dread word 'depression'. The first half finished with a lecture-turned-barn dance party led by University of Alberta folklorist and accomplished Ukrainian folkdancer Dr. Andriy Nahachewsky, which ended up with over half the audience on stage recreating a 1930s-style prairie diaspora hoedown.

The second half of The Great Depression kicked off with a Chaplinesque trapeze performance by the very talented Edmonton circus performer Annie Dugan followed by an experimental film montage entitled AurA centred on derelict farm equipment by filmmaker aAron munson - with a soundtrack evocative of Boards of Canada's woolier moments.Following this was a montage of archival photos from Dirty Thirties Edmonton courtesy of the Alberta Provincial Archives (which MC Kristine Nutting described as "like a prison, except more fun"), an interlude that allowed local noise punk deviants Rubber Nurse to set up their elaborate stage setup consisting of 'prepared' guitars, electronic gear and a 1980s-vintage school overhead projector, featuring a procession of night terror-inspired transparencies. Rubber Nurse's nerve-jangling performance "Sister Missing" was followed by the prodigious and absurdly charming Edmonton rapper/multi-instrumentalist Mitchmatic, who delivered his own heartfelt take on the titular subject to close the show.

The Great Depression was more than simply a good show. It was akin to an audio-visual mix tape that Edmonton could hand to any other city with a reputation for artiness and knock its proverbial socks off. The show made me think of another Nordic city that Edmontonians have been crushing on of late, namely the Icelandic capital of Reykjavik, which starting in early March will be a non-stop flight away from Edmonton International Airport. Thanks in no small part to the international success of alt-pop pixie Björk and the molasses-paced post-rock of Sigur Rós, the pint-sized Icelandic capital has become magnet for hipsters and genuine freaks alike. Are we as cool as Reykjavik here? Well, we don't speak a living fossil language little changed from Old Norse, nor do we have glaciers or thermal pools within an easy day trip of the city. And unlike Iceland, our winters are genuinely bone-chilling. But in artistic terms, surely we're in the same league.

We are that cool here. We just don't know it. While the Make Something Edmonton campaign has done an admirable job raising local awareness of our truly creative and outside-the-box nature, we're still too hung up on being an Oil City, a northern Houston or Abu Dhabi, and have yet to truly embrace our inner Reykjavik or Berlin. But the time will come when we're going to need to. Iceland experienced its own miniature version of the Great Depression in 2008 when its entire banking sector imploded and the country teetered on the edge of bankruptcy - while its arts scene surged, aided by an influx of currency devaluation-driven overseas tourism. Ditto with Berlin, the capital of the beleaguered hyperinflation-plagued Weimar Republic, capital of cabaret and all things racy in the 1920s. Economic history clearly indicated that our runaway oil and gas economy will eventually sputter. And when it does we'll need other things to fall back on.

If we're smart, we'll realize that our arts and culture sector, which unfailingly injects vast swaths of capital into our economy on less than a shoestring, is one of our greatest economic assets. It's also a sector that always seems to thrive when everything else is in the crapper, while simultaneously making bad times a little more bearable. Eventually our runaway oil and gas leviathan will grind to a halt, either slowly or precipitously, driven by plummeting world prices that will once again render bitumen processing unprofitable, and possibly exacerbated by another global recession. It'll suck, but so long as we continue to nurture our arts community we'll always have the likes of Mile Zero Dance waiting for us with open arms, ready to teach us how to enjoy the coming depression.